This article was partly inspired by this incredible piece from the Guardian.

As anybody who has heard me talk about the Premier League, and even European football in general, will tell you, I don’t speak very highly about Arsenal Football Club. I never found any reason to respect them. It seemed all they did was blame referees and bring the game into disrepute.

However, after paying more attention to the mass media lately, I have found that Arsenal (and their manager) are worthy of my respect, even though it still remains very much a love-hate relationship.

I’ve had a few reasons, but the one that stands out in my mind more than any other is infamous enough to be known by its nickname: Pizzagate. This was back when Manchester United were starting to take over my young teenage mind as, in my opinion, the best team in England, Europe, and maybe even the world. I was young and naÃ¯ve once. 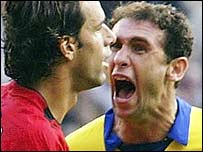 Any way I look at it from memory, and from reading old press clippings, I will always recall the incident as being provoked almost exclusively by the Arsenal players — Martin Keown taunting Ruud van Nistelrooy like a petulant schoolboy is the prime example.

Another reason I have hated Arsenal, which looks to be on the point of invalidity, is Jens Lehmann. I have a lasting image of him faking an ankle injury to buy time at the end of a close match, although it is a vague image because I cannot recall the season, opponent, or score. When he gets the sack, I will have no more reason to complain about him and his association with Arsenal. And he will get the sack, or at least his contract will not be extended. More on him later.

And, last but not least, one of the most popular reasons to want to poke Arsene Wenger with a sharp stick until he looks like Swiss cheese: his blinding failure to use English players on a team that is in the English domestic top flight. Of course, the incident that stands out is the match (or matches) in which the starting eleven had no Englishmen present. 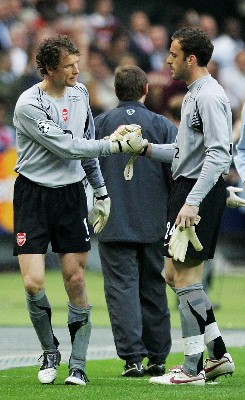 These reasons are all more recent, and therefore have a greater bearing on my opinion. There’s no point in hating something if it no longer exists in the same state of being, is there?

The Guardian article that I referenced at the top is a reason not only respect, but perhaps begin to grow slightly fond of, Arsenal. In particular, I enjoyed Arsene Wenger’s response when asked if Lehmann will be offered a contract extension:

Lehmann has been increasingly getting under Wenger’s skin and there was a telling scene at the manager’s press conference yesterday when he was asked whether the German would get a new contract when his present deal expires at the end of this season.

The question was repeated and Wenger snorted with laughter.

Normally, these kinds of things don’t amuse me, but it seemed particularly just that this question wouldn’t even get a one word answer from the boss, but instead just a laugh.

Almunia has also taken Lehmann’s childish antics quite well, and this is the first time he has spoken out in the press so openly about it. (Read the lovely article if you want more, but I have more points to make.)

I also came across an issue of Four Four Two with Arsene Wenger smiling from the cover, and after flipping through it, I found an interview with the man himself, with questions from the fans (Four Four Two’s One-On-One segment). 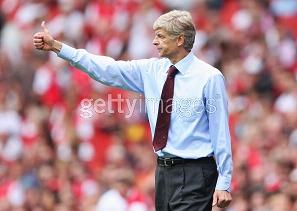 Some of the statements he made, such as the one about having to let any player (Thierry Henry) go if he wants to leave after eight years of service, the one about football’s role models’ influence on the world, and especially the one about him wanting to make the future of Arsenal based on the academy that is full of English boys (not in the online version) definitely leave me with a different sense of Arsene Wenger. This sense is one of a man doing his job the right way, not a man who belittles referees and calls opponents cheats (although that was never proven by the FA).

Arsene Wenger, and the club in general, deserve respect also because of their commitment to developing younger players. After Arsenal’s Champions League exit at the hands of Liverpool, Wenger stated that the future of Arsenal lies on the shoulders of the younger players. He has always shown this commitment, leaving the Carling Cup to his young guns, along with the previous statement about bringing talent up through the Academy to the first team, and should be commended for it. 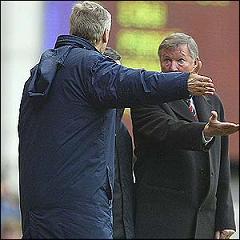 My views of Arsenal have changed. Like George from It’s a Wonderful Life, I now realize that if Arsenal and their manager had never existed, or at least not existed in the way it did, Premiership football would have been far less entertaining. Not only would it be less entertaining, in the right and wrong ways, but English football would not have seen some of the advances it has in the players’ diet and team tactics without Arsene Wenger.

Arsenal is not, and never will be, my favorite club. I can’t even say that I like them. However, I no longer think that every Gooner is a moron who can’t reason and do basic mathematical problems.

Despite my new-found respect, I will have no qualms about supporting United on Sunday and in the title chase. But if they do manage to win tomorrow, I won’t gloat like I would have in years past, just like if they lose, I won’t grieve like I would have. To use words Wenger might appreciate: c’est la vie.