If you read the five reasons why you should play the Soccerlens Fantasy Football Game, then you should be ready to sign up and pick your fantasy team. To help you do that I’m going to take you through the process step by step, explaining how I picked the Soccerlens All-Stars XI.

First you need to choose which level of play you’ll be competing at in the first week. Practice is free, but you can’t win any money. Silver is $4.99 and winning your 11 team league nets you $40. Gold is $9.99 and you win $80, Platinum is $24.99 and you win $200. For the first week I’m going Practice, because I need it. But in future weeks I’ll be playing at the higher levels and keeping track of money won and lost.

Once you’ve chosen your level, it’s time to select your fantasy XI. To do that, it’s important to know the rules and the scoring system. You can pick any Premier League players, regardless of price, with the one restriction being that you can’t choose more than two players from any one Premier League team. Your players score points like this: 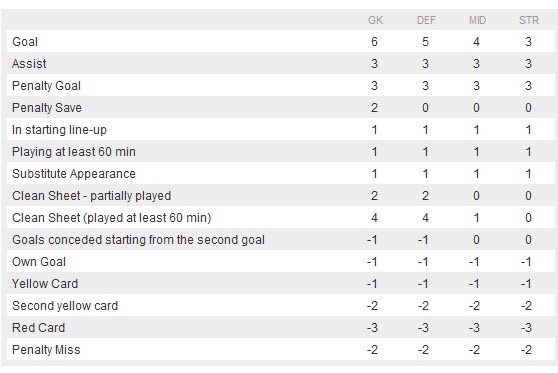 Though many people see goalkeepers as a fantasy football liability (I know people who deliberately pick a keeper who won’t play, so he can’t lose any points for goals conceded) a good keeper is a steady source of points. It’s one point for every game started, a second point for playing 60 minutes or more, then four points for every clean sheet. Pepe Reina is a regular starter for Liverpool and doesn’t concede many goals. Do me proud Pepe.

Defence is tricky, but it’s a potential points bonanza. Defenders receive the same points as goalkeepers for clean sheets, but also three points for every assist, plus five points for every goal scored. With so many points available I never considered anything less then four players at the back. As for specific choices, I’ve put my faith in left backs, hoping Patrice Evra will benefit from Man Utd’s always sound defensive record (plus to get the odd goal and assist) and Ashley Cole the same for Chelsea. Especially since Chelsea host newly promoted West Brom this Saturday.

Looking in the Soccerlens Fantasy Football Game Stats Center I saw that Arsenal’s Thomas Vermaelen was good for seven goals last season, so he’s in. My final choice was Jody Craddock. Don’t laugh. He scored five goals last season, and Wolves’ decent defensive record is basically what kept them up. Plus I’m a Wolves fan and believe it’s bad luck to not have any of your own players on your fantasy team.

Goals from midfielders are worth four points, so I thought I’d try the old school trick of finding a midfielder who should arguably listed as a striker. Take a bow Andrei Arshavin. The little blonde Russian’s inclusion means no place for Cesc Fabgregas (because with Vermaelen on board that’s two Arsenal players already). But that’s OK. Cesc has had a weird summer, so I’m waiting to see how he does. I can always sign him up for week two, because in this game you can change your lineup every week. Also, I have the man, the myth, the fantasy football legend that is Frank Lampard. According to the Stats Center, Lampard’s goals, assists and science defying ability to play an inhuman number of Premier League minutes would have made Lampard the highest average point scorer in the Soccerlens Fantasy Football Game last season. For that reason, Franks is also my captain, because captain’s points count double. Liverpool’s Steven Gerrard is my third and final midfielder, for his goals and assists. They say Gerrard and Lampard can’t play together, but that’s not true in fantasy football.

I’ve mostly steered clear of Spurs and Man City players, because the two face each other on opening day and I’m unsure who’s going to start stronger. However, Carlos Tevez had a strong finish to last season and a solid World Cup, so I’m picking Carlitos as one of my three strikers and expecting even more goals from him. In my forward line he’ll be reunited with former Manchester United teammate Wayne Rooney, whose poor World Cup and poor behavious have made him less popular than usual. So Roonaldo’s perfectly poised to bounce back and remind everyone why we expected so much from him to begin with. My third and final striker is Bobby Zamora, who didn’t get a World Cup, but maybe deserved one. He’ll spend this season reminding Fabio Capello of that by scoring goals for Fulham, beginning against Bolton this weekend.

So here’s how the Soccerlens All-Stars line up: 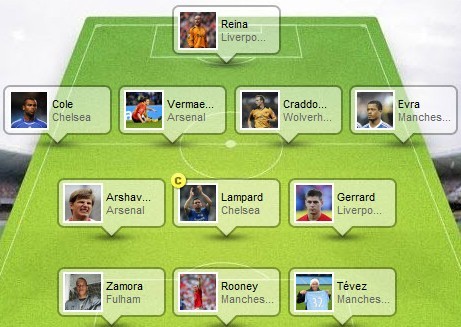 Now you know how it’s done, sign up for the Soccerlens Fantasy Football Game and pick your team, and see if you can outscore the Soccerlens All-Stars.