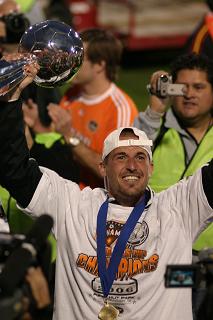 Not too many things need to be said about the Dynamo in 2007. They won the MLS Cup by using their established core of players (much like New England’s core) and winning matches at key times. For instance, they were on a three-game losing streak in early June when they came up against their in-state rival FC Dallas and won 2-1, spurring them on to a eleven game league unbeaten run that led into August.

In cup competitions, Houston made it to the semifinals of the CONCACAF Champions Cup, going down in extra time to Pachuca of Mexico. The US Open Cup was very disappointing, going out in the third round (their first match) to Charleston of USL-1, which is the American second division. The SuperLiga ended similar to their Champions Cup run — against Pachuca again, but in penalties this time.

Englishman Tony Caig was signed from Gretna FC to be the second choice goalkeeper after Zach Wells was traded to DC United. Bobby Boswell came over in that trade and will likely be an influential player in the back for Houston. Paul Dalglish, Kenny’s son, signed with Kilmarnock. Speedster and nine goal scorer Joseph Ngwenya moved on to SK Austria KÃ¤rnten.

I promise I’m not all that biased towards goalkeepers, but veteran Pat Onstad did set a league record for lowest goals-against average and has been capped 52 times by Canada. He anchors the team and leads by example of how a professional should do the job.

Dwayne De Rosario is another Canadian (45 caps) who impacts the league greatly. 2007 MLS Cup Most Valuable Player (or Man of the Match, if you prefer), he scored six goals and had five assists, including the game winner in the title match.

As witnessed last season, if this team doesn’t score goals, it’s not pretty. Starting off with two wins, a draw, and five losses is not usually consistent with a championship team. But as soon as the new signings made last season began to kick in, they went on that eleven match tear that I mentioned earlier.