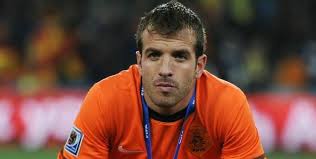 Rafael Van Der Vaart has been ruled out of the World Cup. The 31-year-old midfielder suffered a calf injury at Holland’s training camp in Portugal on Tuesday.

Manager Louis Van Gaal will name his final 23 man squad on Saturday and will have to make do without his most experienced player. With 109 caps to his name, Van Der Vaart played in both the 2006 and 2010 tournaments and is the scorer of 25 international goals.

Van der Vaart is no longer a guaranteed starter for the national side and has had a tough season with his club side Hamburg narrowly avoiding relegation in the Bundesliga. News of the former Real Madrid man’s injury is a further blow to Van Gaal though with Kevin Strootman and Gregory Van De Viel having also been ruled out of playing a part in Brazil.

Holland face Spain in their opening match on 13th June and are in a tough group along with Chile and Australia. Van Der Vaart’s squad replacement is expected to be either PSV’s Georginio Wijnaldum or Tonny Vilhena of Feyenoord.