It is never too early to start thinking about next season. The best US sportsbooks appear to have received that message too as they have already started pumping out odds for the 2023 Heisman Trophy Winner. Here, we will take at the sportsbooks‘ favorite Heisman candidates and their odds as 2023 Heisman Watch gets off to a very early start. 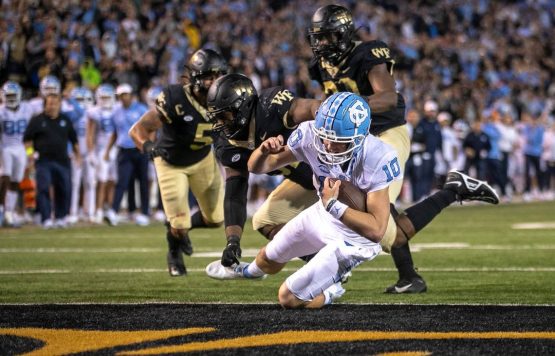 The very early favorite to win the 2023 Heisman Trophy with BetOnline is North Carolina Tar Heels quarterback Drake Maye. The issue that Maye will have is the Heisman Trophy is increasingly getting awarded to players on teams that are competing for end of year honors.

UNC tends to struggle defensively, so that will allow Maye to get involved in shootouts to inflate his stats. However, he will be dealing with a new offensive coordinator in 2023 after Phil Longo left to fill the same role at Wisconsin.

There is likely very little value in Drake Maye at the current odds of +525, which should leave some value elsewhere in the market. 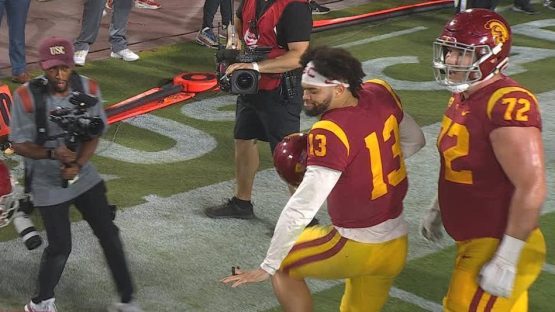 The second favorite for the Stiff Arm Trophy with BetOnline is the 2022 Heisman Trophy winner Caleb Williams. Williams was the deserving winner of the 2022 award and should probably be the favorite once again.

Williams has flourished under head coach Lincoln Riley and the Trojans offense has replenished most of its lost talent through the transfer portal and recruiting for next season. However, Williams did lose his favorite target, Jordan Addison to the 2023 NFL Draft.

With Williams poised to improve through experience, it would be a surprise if he was not at least a finalist for the Heisman next season. 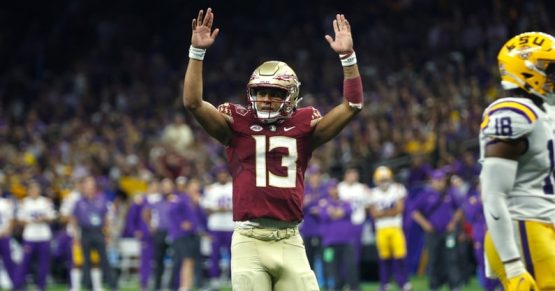 Florida State QB Jordan Travis is BetOnline‘s third choice to win the Heisman with odds of +800. Travis will be entering his sixth season in college football, his fifth at FSU, and he keeps improving every year.

Last season, Travis accounted for 32 total touchdowns, 24 through the air and eight on the ground for the Seminoles. If the leap he showed from sophomore 2021 to the 2022 season can be replicated, Travis could be following in the footsteps of former FSU Heisman Trophy winner, Jameis Winston.

The true dual-threat quarterback faces LSU first up in a tricky test, so it will be interesting to see if Travis can navigate that challenge and kick-off the 2023 season with a win that immediately puts him in the Heisman race. 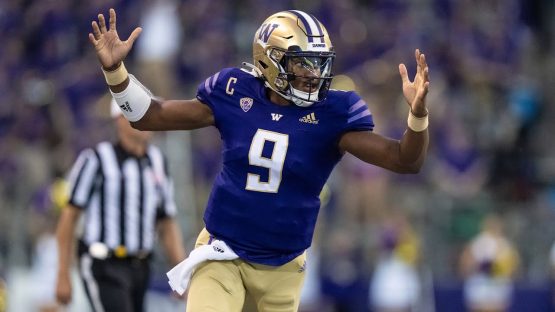 Michael Penix was probably the most underrated quarterback in the 2022/23 season. The lefty threw for 4,641 yards and 31 touchdowns during the season.

He led the Huskies to an 11-2 record, and will return his favorite receiver for 2023. Rome Odunze could have went to the NFL draft but decided to return for another season at UW.

In a pass heavy offense with his favorite target back, Penix could rack up serious numbers next season. Definitely one to watch. 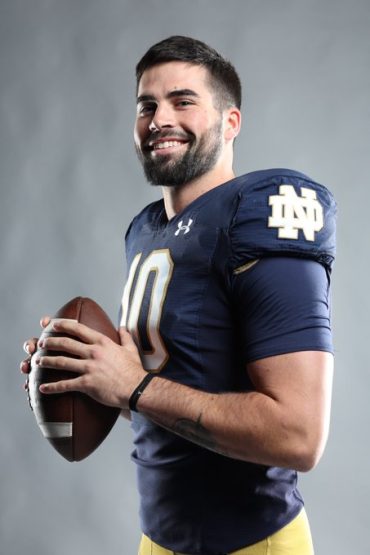 Sam Hartman made the move from Wake Forest to Notre Dame at the beginning of January. Part of his decision likely came down to a chance for bigger postseason honors with the Fighting Irish.

An indirect result of that may be putting himself in line for individual honors and inserting himself into the Heisman race. Hartman suffered from a blood clot to start the season and it wasn’t known if he would be able to play again. However, he made a miraculous recovery and was able to play 12 games for the Demon Deacons. He managed to rack up over 3,700 yards and 38 touchdowns in those games.

It will be interesting to see how Hartman performs with a bit more expectation hanging over him. He is talented enough to make a run at the Heisman and guide Notre Dame to the CFP. Whether he will or not remains to be seen.