Tomorrow sees the biggest weekend of action this season in the EPL. Here’s my full preview of Sunday’s games…

The biggest club game in England rears its head for the first time this season. So here’s what to expect. 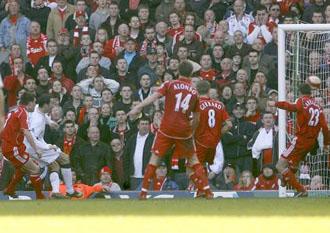 Against Marseilles everything went swimmingly for Liverpool. They dominated the game from start to finish, and there is no reason why they can’t carry this form onto the game against United. The thing that has finally started clicking for Liverpool — last week aside — is the fact that Gerrard has found his niche and his space for playing in, Javier Mascherano has found his place in supporting Gerrard, Torres is back to fitness and scoring spectacular goals, Ryan Babel has finally started showing some promise and the defence looks solid.

Liverpool’s main strength at the moment is their colossal midfield. There aren’t many teams — except maybe United, funnily enough — who can rival Liverpool’s midfield. The partnership of Gerrard and Mascherano has turned out to be one of the best in the league, and on the flanks Benayoun and Babel have started to put some decent form together. Add to this equation a couple of great cameos from Harry Kewell and this becomes a quite special midfield.

Injuries — Xabi Alonso returned to training this week and is expected to start on the bench, meaning Javier Mascherano should keep his place in the middle with Gerrard after recovering from his midweek knock. Daniel Agger is again sure to miss out however.

Key Player — Alvaro Arbeloa and Steve Finnan are going to be knackered after this game. They have got to mark Ryan Giggs and Cristiano Ronaldo out of the game, and the way the two have been playing recently it’s easier said than done. If these two are kept quiet however, United will have to rely on their midfield to supply Rooney and Tevez’s ammunition, and although Michael Carrick is a great passer of the ball, this will probably result in the strikers playing deep, right into the hands of Mascherano.

The performance against Roma wasn’t a reflection on how United will do tomorrow in all fairness so let’s go to last week against Derby. 4-1 the score, and a fairly decent performance in difficult conditions. Rooney will be looking to get one over on his nemeses at Anfield. United are in decent form at the minute though — apart from the 1-0 at the Reebok — and Anderson especially has been impressive.

United’s strength? Defence. Nemanja Vidic has been a revelation since he arrived at Old Trafford; Rio has had some strong performances this season; Evra has been excellent BUT Wes Brown is a potential weak link. He will have to deal with either Babel or Benayoun I expect, who themselves are in scintillating form, so that will be an interesting story to watch throughout the game.

Injuries — Owen Hargreaves is set to return to the United squad after recovering from tendinitis. Scholes however will be out until January, and Neville will take a lot longer. There are always doubts flying around about Louis Saha’s fitness however, but he should be on the bench. Apart from that, clean bill of health for United.

To sum up this is going to be a great game. We should expect open football, attacking football, and a few goals. The Gerrard-Torres partnership will again be instrumental, and I think Liverpool’s strength in midfield, coupled with the outstanding Fernando Torres point towards a Liverpool victory.

The biggest London derby of the year gets played for the first time this season. Here we go…

Arsenal were pushed all the way by Steaua in midweek, on top of a difficult weekend against Middlesbrough last week. 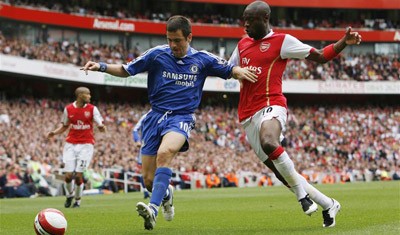 They deserved to lose against Middlesbrough, and this is a real sticky situation for Wenger’s boys to be in now. Just the right time then to welcome back your star men, Robin van Persie and Cesc Fabregas.

Arsenal’s main strength is their cool really. They usually just pass the ball around nice and calmly waiting for the opening to present itself. It’s worked all season until recently, and now its a test of character for Wenger and his kids. The defence however, is usually excellent, I’m a big fan of Toure and Gallas at centre-half, and Sagna has been top drawer since his arrival.

Injuries — Aliaksandr Hleb is set to miss out, but Cesc is now rated ass 70/30 and RVP is certain to return to EPL action. Cesc’s minder however, Mathieu Flamini, is a serious doubt, so Gilberto is set to deputise. Also returning to the squad is Abou Diaby.

Key Player — RVP, without a doubt. He will need to inspire the youth around him to give a big performance, and as star man they will look to him to do something special with the ball.

Again the midweek draw against Valencia wasn’t to be taken into account, so we shall look to last week’s game for evaluating Chelsea. 2-0 the score, Sunderland the opponents. The Mourinho in Avram Grant has been brought out well and truly, just doing what needs to be done and nothing else flamboyant. But still, they’re winning games so fair play to them.

Chelsea’s main strength is the attacking talent that they possess. Frank Lampard, Joe Cole, Shaun Wright-Phillips, Salamon Kalou are all big players for Chelsea at the moment, and they are all in decent form. Big test for Andrei Shevchenko, he will most probably leading the line against Arsenal and will have to show some AC Milan form, without a doubt.

Injuries — The big absence obviously is Didier Drogba, the colossal front man. Also Riccy Carvalho will not feature, but apart from that no new worries for Avram Grant.

Key Player — John Obi Mikel. He will need to silence RVP, who will play in that free role. Also he will need to push the forward players on in front of him to press for that goal.

To sum up this should be a tight game with few openings I feel. I think that Chelsea will definitely feel that they can take something off Arsenal though due to both sides current form, so I’m going to plum for a narrow Chelsea win here.

It’s tomorrow then, air your feelings about the games below!