So the injury is not that serious and Manchester United fans can breathe a sigh of relief. Marcos Rojo who sustained a shoulder injury in the Manchester Derby could be back into action in just two to three games according to his father. It was believed that the Argentine defender could have been out for a longer period of time but Rojo’s father claimed, “It is not too severe. He will miss two or three games.” 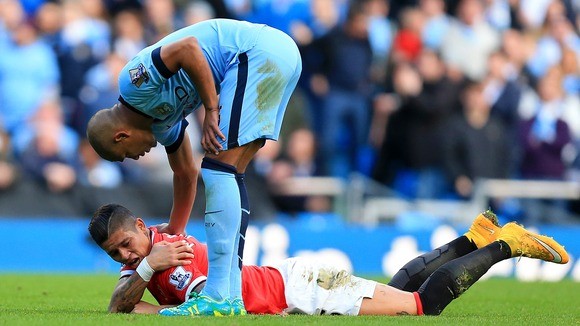 This means that Rojo would be in line for making the starting eleven against Arsenal on 22nd November. However United have a serious injury crisis for next weekend’s encounter against Crystal Palace.

With Rojo missing and Chris Smalling serving a suspension, manager Louis Van Gaal might opt to field Michael Carrick alongside youngster Paddy McNair in the heart of the defense.  While Phil Jones has shin splits , right back Rafael is laso nursing an injury. However, Johnny Evans is back in training and might be available for the weekend.

The Premier League will then have an International break before the action resumes on the 22nd of this month. Rojo will thus miss out on Argentina’s friendly matches against Croatia and Portugal.