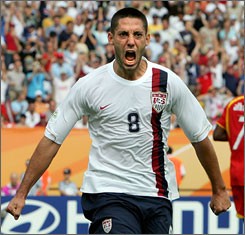 With the Gold Cup taking a break before the quarterfinals begin Saturday afternoon there’s some down time for the teams to settle in, rest and reboot for the start of the knockout stages. For the U.S. and Mexico there’s also some player news.

The U.S. has two of their most important players on the team set to miss Thursday and Saturday training sessions to attend separate weddings this weekend. Front line attackers Landon Donovan and Clint Dempsey will be away from the team to attend the nuptials of family members but will be back in time for the team’s match against Jamaica.

With their experience with the team the stars’ absence will not matter much on the field. With the team’s recent performances their break may be welcomed to recharge their batteries as the team looks to raise their level of play against a tough opponent.

While the U.S. knows they’ll be at full strength for their match Mexico still has players missing due to a failed drug test. Those five players were at UCLA to

get the results of a second drug test which came back negative. The test was administered to the five players June 10 – a day after they were removed from the squad due to original failed test – but the Mexican FA has not decided the groups fate.

Now the situation will shift to the Mexican FA getting a “B” or back up sample given in May to be tested. With the investigation ongoing, it’s not clear what will happen to the five players ahead of this weekend. While everything has gone very well for El Tri they have not been able to replace the five players without a decision being made.

Whether the second test is run will likely determine the fate of the five, something the Mexican FA would likely prefer to happen sooner than later.