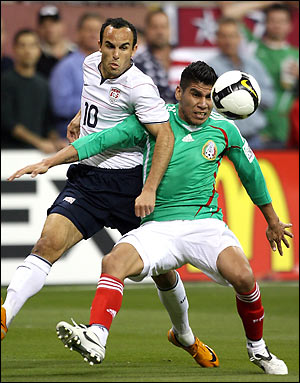 It looks like the El Tri’s Gold Cup doping issue has reached a conclusion. Days after the five players were given clean test results from a June 10 sample FIFA has ruled that Mexico can replace the five players they removed from the squad.

After the reported failed tests on June 9 the Mexican squad has played with just 18 players – now 17 with Ricardo Osorio leaving due to illness – for much of the tournament. It’s not clear who they will bring in or when they will join the Mexican squad – which is preparing in New Jersey for their quarterfinal match with Guatemala.

Without knowing who or when they’ll arrive here are a few players El Tri could be bring in to supplement their roster:

GK Liborio Sanchez (Veracruz) – A talented 21 year old ‘keeper who could be brought in for experience. It’s never a bad idea to get a young keeper in the mix to learn and observe.

GK Luis Michel (Chivas de Guadalajara) – An experienced ‘keeper who can put in significant minutes and contribute in a pinch.

FWD Carlos Vela (Arsenal) – The talented forward was one of the bright young stars in the 2009 Gold Cup but a tough loan spell at West Brom ruled him out of the Gold Cup roster. He would provide an instant punch in addition to Aldo de Nigris.

RW Edgar Pacheco (Atlas) – A creative and exciting winger who’s another young player who can make the ‘rich get richer’ in the attack.

LB Miguel Angel Ponce (Chivas de Guadalajara) –This call up could serve two goals. One it would add to the backline depth and, two, it would cap tie the defender who has citizenship with the United States – of course that will likely happen anyway at the Copa America.

CB Jonny Magallon (Chivas de Guadalajara) – A good center back who can provide depth to the Mexican backline.

None of the call ups – especially in midfield or at forward – will likely see much time in the tournament. But having some of these young players in the team and training will help confidence and experience. Also, a player like Pacheco or Vela could provide a creative and energetic spark off the bench.

We should know who the Mexican will bring in some time in the next few days.