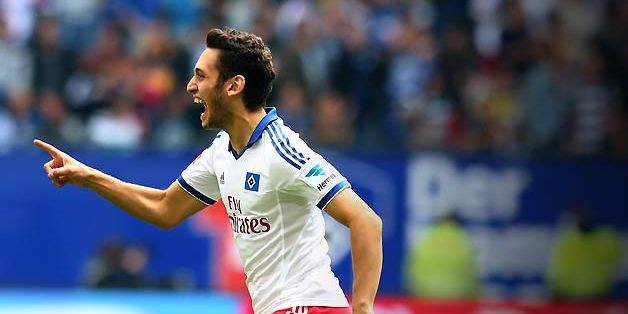 Hamburg midfielder Hakan Calhanoglu, who is said to have been a recent transfer target for both Arsenal and Liverpool, scored an absolutely blinding free-kick against German giants Borussia Dortmund on Saturday, with the effort being hailed as goal-of-the-season so far.

A full 50 yards out from goal in the final few minutes, and with Hamburg already 2-0, the Turkish attacker let fly with venomous dip and swerve. Spiraling into Roman Weidenfeller’s top right, players from both sides looked stunned, with Calhanoglu simply raising his arms to the sides like a triumphant gladiator.

Calhanoglu scored what I consider the best goal this season, otherworldly strike: http://t.co/hzYpcOPeBr

Hakan Calhanoglu: “I hit the free-kick the same way I do in training all the time. I’m delighted that I pulled it off!” #HSVBVB

Dubbed the ‘new Ozil’ due to his Turkish/German heritage and silky style of play, this kind of outrageous behavior will undoubtedly add even more names to the list of potential suitors for his signature, with Arsenal and Liverpool set for a fight on their hands if they return for the 20-year-old in the summer.

What do you think? Goal of the season so far? Let me know in the comments below…