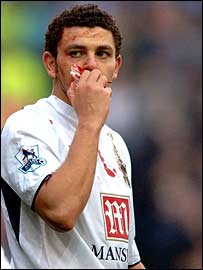 A straight kick to the mouth will leave most people out cold and out of the fight.

Hossam Ghaly not only got back up on his feet and jogged out to the touchline, he also cleaned up and came back on the pitch, despite having lost some blood and four of his front teeth.

He was hauled off at half-time (with good reason), but the 30 minutes or so he played without his teeth on the pitch was a testament to the spirit showed by the team and his display must have inspired his Tottenham team mates as well.

As it usually is with Tottenham (as far as I’ve seen), whenever the team is categorised as underdogs going into a match they manage to raise their game and deliver a fighting performance more often than not. Credit for this goes to Martin Jol, and Tottenham will consider themselves unlucky to not get the full 3 points from Fratton Park.

The match? It ended up in a draw with Portsmouth and Tottenham staying in their 6th and 7th places respectively. 4 points separate the two sides, and along with Bolton, these two are the leading contenders for the European spots outside the big 4.

16 games still left to go, but it would take a shocker from Tottenham to not find them in the top 7 by the end of May.