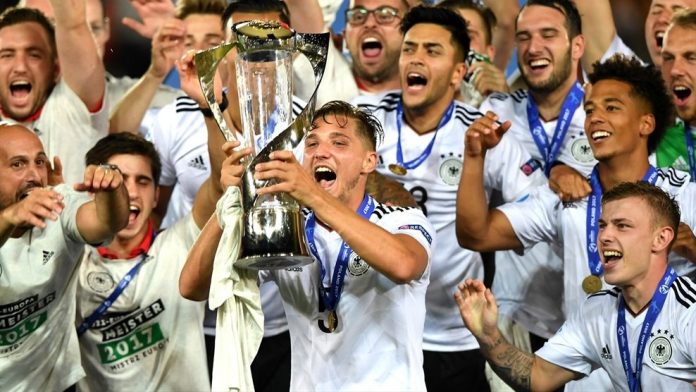 It was definitely an unexpected result. Not because Germany lack quality, but because opponents Spain were packed with it. The tournament’s most exciting players, Saúl Ñíguez (who won the Golden Boot), Marco Asensio, Dani Ceballos (who won the Player of the Tournament), big names like Hector Bellerin and Gerard Deulofeu, were part of the very exciting Spain team. It is little wonder that La Roja were the favourite to lift the trophy.

Spain have also been extremely dominant in this competition and were looking to win the tournament the third time in the past four editions.

Germany, meanwhile, were missing Leroy Sané, Jonathan Tah and Julian Weigl to injury while several of Germany’s usual under-21 internationals are in Russia for the Confederations Cup.

Perhaps, the final is the best demonstration of the saying, ‘teamwork makes the dream work’. With a display of teamwork, organisation, resolution, and sheer grit, Germany ultimately walked away with the crown at the Euro U-21 Championship.

Germany went ahead just before half-time when Mitchell Weiser cleverly looped the ball with his head after meeting Jeremy Toljan’s accurate low cross. It was a stunning goal that gave the side it’s first win since 2009. That German team beat England in that final and included the likes of Manuel Neuer, Mesut Ozil, Jerome Boateng, Sami Khedira and Mats Hummels, which is certainly encouraging for the youngsters that won this edition of the tournament.

The German game plan was astute and worked to perfection. Despite what the scoreline may suggest, Spain were completely held back. Germany didn’t allow them to get a foothold in the first half to build up play, which is their strength. When they started getting into the game slightly in the second, it was too late. The Spaniards were only able to exert pressure for patches in the second half.

The final ultimately belonged to Germany, who were able to execute coach Stefan Kuntz‘ plan perfectly.