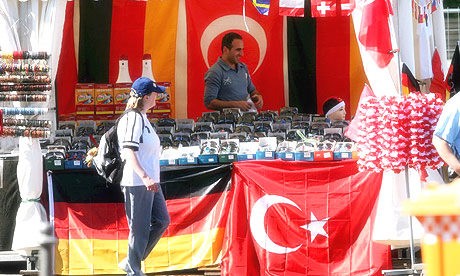 Leaders of Group A Germany and Turkey go face to face tonight in Berlin in what could be a key fixture in determining which team will top the group. Both teams have been very successful so far but injuries will be a concern for both teams for this match.

Guus Hiddink and improvement go pretty much hand in hand. Although when Hiddink was coaching Russia, Germany was the team to stop him in his tracks.

Turkey took care of Kazakhstan very easily in their opening match before winning a thrilling dogfight against Belgium. This time around though, Hiddink will be without Arda Turan (groin) – he has scored in both the previous games. Selcuk Sahin is also unavailable. Although Borussia Dortmund’s Nuri Sahin is available. He would have gone a full year without playing a game for his country if it wasn’t for this opportunity to arise.

Michael Ballack’s absence is being ignored this time and the focus has been on Lewis Holtby and Bastian Schweinsteiger. Holtby will have to wiat till November for the friendly against Sweden and Schweini is out with a foot ligament injury.

That leads to Jaochim Low’s experiment of featuring Toni Kroos alongside Sami Khedira. In the run up to the World Cup, the combination was efficient against Malta and hungary but Kroos’ ability to focux still has question marks all over it.

Marcel Jansen’s absence gives Jerome Boateng to occupy the left back spot once again. Hamit Altintop-Boateng duel did not occur in either of the Bayern Munich-Hamburg SV matches last season so we don’t know what will happen when Boateng challenges Hamit.

You can watch Turkey take on Germany live online as well as all other Euro 2012 Qualifying matches, plus hundreds of football games from around the world. Read our live football page for more details.