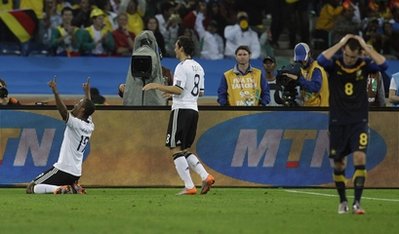 The third place finishers from the 2006 World Cup, Germany, kicked off their 2010 Group Stage with an impressive 4-0 win over Australia.

Overall, it was a solid performance throughout the German side as they had goals from four different players and kept a clean sheet. The goals were scored by Podoski in the 8th minute, Klose in the 26th minute, Muller in the 67th minute, and Cacau in the 70th minute.

The win puts Germany in great shape to win Group D while Australia’s chances are in trouble. Australia will be without Tim Cahill who was given a red card in the 56th minute.