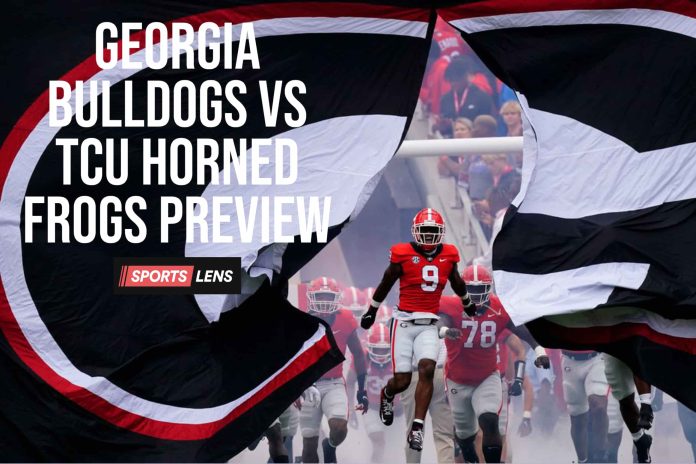 The stage is set for Monday’s NCAA football playoff match-up between defending champions Georgia Bulldogs and TCU Horned Frogs, as the SoFi Stadium in California plays host to this intriguing National Championship decider.

TCU have claimed just one championship, way back in 1938, and the anticipation for this game is palpable in Texas as they prepare to face 12.5 point betting favourites Georgia, who will look to retain their crown having stormed to a 33-18 victory over Alabama Crimson Tide in Indiana last year.

The Bulldogs enter their second successive championship game in scintillating form having swept aside every challenger this season, going 14-0, and find themselves in the midst of a 16-game winning streak.

They have the opportunity to become the first team since Alabama 12 years ago to win consecutive national titles, and enter this contest as strong moneyline favourites at -435.

Stetson Bennet at quarterback has been a standout performer for Georgia, earning him a place in the running for the Heisman Trophy where he finished fourth in the final voting. Ranking in the top 10 for completion percentage and passing yards, the 25-year-old has been touted as a potential NFL draft for next season and can be the catalyst for another Bulldogs championship, just as he was this time last year having registered two TD’s and thrown for 224 yards.

As for the Horned Frogs, they will be hoping to write a fairytale climax to their Cinderella story. Having relieved legendary coach Garry Patterson of his duties last season after going 5-7, no one would have expected TCU to be challenging for the National Championship and first-year coach Sonny Dykes’ enthusiasm has proven to be infectious.

There have been multiple instances this season where it looked as if this underdog story could be cut short, but they ended up claiming a huge upset in the Big 12 where they were widely predicted to finish around seventh, and instead topped it with a 13-1 record. They rounded off their season with a flourish in the Fiesta Bowl, edging the 13-1 Michigan Wolverines with a 51-45 victory.

As dominant as the Georgia Bulldogs are, the value certainly lies with Texas who are priced at +335 in the current markets.

It is interesting to note that public betting has swing in favour of TCU, with 84% of the wagers and 69% of the money on TCU, according to data collected by BetOnline.

Compiled using geotagged Twitter data with hashtags such as #GoFrogs (TCU) and #GoDawgs (Georgia), as well as more widely used hashtags such as #NattyFrogs and #DawgNation, indicates that TCU have edged out in front with the lion’s share of 28 states backing the underdogs compared to 22 for Georgia.

The champions, for all their attacking prowess, have failed to repeat their defensive heroics of 2021/22 and TCU will take comfort in the fact that the Bulldogs conceded 71 points across their final two games, including 41 against Ohio State in the Peach Bowl.

Taking that into account, as well as the fact the Horned Frogs have put up 40+ points in seven of their games this year, we are confident their offence could be the cause of concern for Georgia who have often found difficulties defending against dynamic passing attacks this season.

While the champions are rightly weighted as the heavy favourites, +335 is a fantastic price for a side who have consistently proven their doubters wrong this season.

The implied total points for this match-up, set at 63, could also be hit given their high-scoring games with sides have endured as of late – Georgia have seen this selection come through in three of their last five while TCU have repeated that feat in two of their last three.