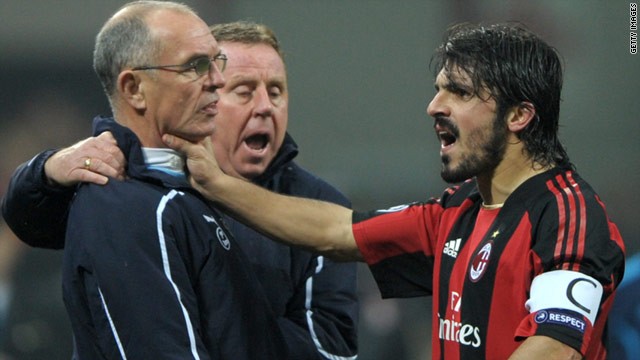 Former AC Milan midfielder Gennaro Gattuso has said that he would not hesitate to take the Manchester United managerial role, if he was ever presented with the opportunity to do so.

The 38-year-old who won World Cup with Italy and two Champions League with Milan, added that he is attracted by the English style of play and the passion the fans and the players have for the game.

“[Sir Alex] Ferguson has always respected me — and I have always admired the Premier League which, for me, is the best league in the world.

“In Italy, we are tactical masters, but in England you see pacy players with great strength in their legs.”

Gattusso is now the manager of Serie C side Pisa and he has also managed at Sion and Palermo.

The Italian has admitted that he watches a lot of English football, mainly the Championship football, and sometimes records more than one game in the evening to watch it later and keep up with all the action.

According to reports from English press, Manchester United have joined the race to sign Mario Gotze, who is also attracting interest from Liverpool.

Gotze has played only 11 times for Bayern this season, and the German giants are ready to sell him to the highest bidder.

The former Dortmund forward reportedly worth around £31m, but his value cold rise or fall, depending how he fares at Euro 2016.