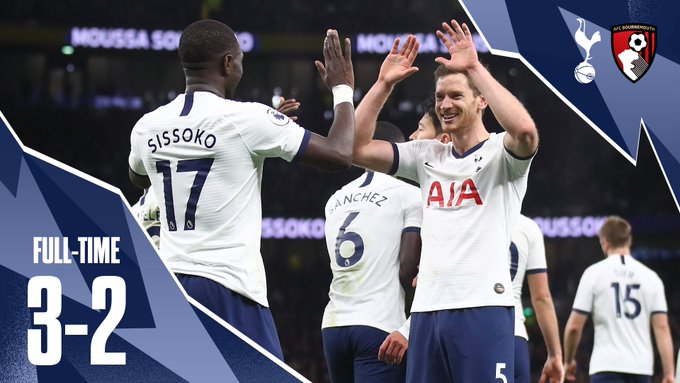 Tottenham Hotspur secured their third consecutive win under Jose Mourinho as they won 3-2 against Bournemouth in the Premier League on Saturday.

Dele Alli once again produced a fantastic performance as Spurs earned all three points to move to fifth in the table, just six points behind fourth-placed Chelsea.

Alli, who appears to be flourishing under Mourinho, scored the opening goal in the 21st minute. He raced on to Son Heung-min’s touch to tap the ball past Cherries goalkeeper Aaron Ramsdale.

Toby Alderweireld once again involved in the second goal, as Alli expertly controlled his pass before holding off Jack Stacey and flicking the ball over Ramsdale.

Moussa Sissoko added Spurs’ third goal with a close-range volley from Son’s cross to make it 3-0.

Harry Wilson pulled one back for the visitors with a magnificent freekick. The on-loan Liverpool midfielder scored again on the 96th minute but it was too late for the Cherries.

Spurs enjoyed 54% of possession and attempted 15 shots of which they managed to keep five on target, according to BBC Sport.