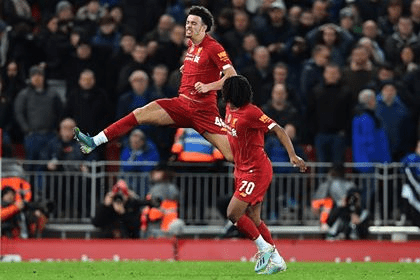 Liverpool have progressed to the fourth round of the FA Cup after beating Everton 1-0 at Anfield on Sunday.

Jurgen Klopp made nine changes to the side that won 2-0 against Sheffield United last time out, with the Reds boss giving chances to several young players including three debutants – Takumi Minamino, Nathaniel Phillips and substitute Yasser Larouci.

In the second half, a stunning goal from 18-year-old Curtis Jones sealed the tie in Liverpool’s favour. The youngster grabbed the Merseyside derby glory with a magnificent strike from outside the box that evaded the outstretched arms of Jordan Pickford as it hit the top corner.

Incredible goal from Curtis Jones for @LFC and it appears the Anfield wait for @Everton will go on. 🤦🏻‍♂️

Everton created a few very good chances in the first half. However, Liverpool became utterly dominant as the game went on, with the young brigade playing with a lot of confidence.

The Reds managed 57% of possession and attempted 12 shots on goal during the game.

Liverpool suffered an early blow through the injury of James Milner. Alex Oxlade-Chamberlain, however, came back from injury and played the last 20 minutes in place of Minamino.