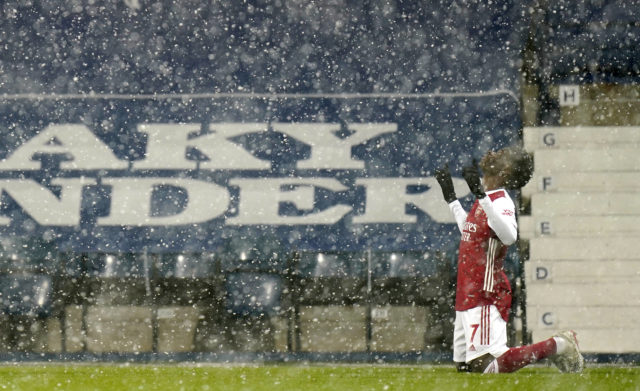 Arsenal produced arguably their best performance of the season till now after winning 4-0 against West Bromwich Albion on Saturday at the Hawthorns.

Only a few weeks ago, the Gunners were struggling badly and were fighting with teams at the bottom. With Arsenal’s back to the wall, the fightback began and three straight wins have now taken them to 11th in the league.

Goals from Kieran Tierney, Bukayo Saka, and a brace from Alexandre Lacazette secured all three points for the Gunners.

Lineker was particularly impressed with Saka and hailed him as a ‘very exciting’ talent.

Another beautiful goal from @Arsenal. 2 youngsters, Saka and Smith-Rowe playing some devastating football. 👌🏻

Young @BukayoSaka87 seems to be able to play anywhere…and whatever position he’s asked to play, he does so brilliantly. Very exciting talent.

The 19-year-old attacking midfielder is indeed a promising young talent. The versatile attacker – who also scored against Chelsea – has managed three goals and an assist in the Premier League this season so far.

Saka was simply outstanding against the Baggies. He was a threat throughout the game and rounded off a stunning, slick, one-touch passing move to make it 2-0 before half-time.

Since the start of last season, Saka has been directly involved in 22 goals, the second-most by a teenager currently playing in the Premier League after Mason Greenwood.

Arsenal are growing in confidence and the likes of Saka, Tierney, and Smith Rowe have played a big role in reviving the club’s fortune.

It was a dominant performance from the Gunners. They enjoyed 62% of possession, and registered 21 shots during the game, according to BBC Sport.