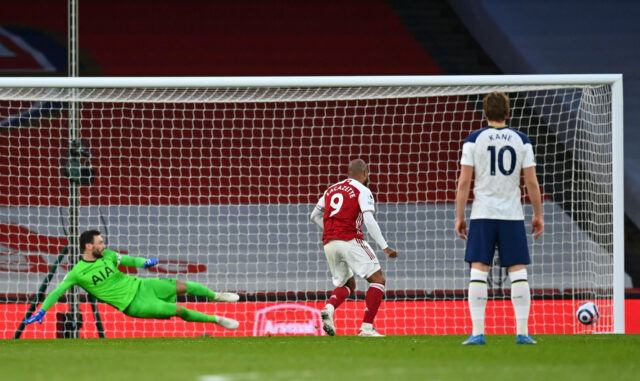 Popular football pundits Gary Lineker and Jermaine Jenas have suggested that Arsenal should not have been awarded a penalty against Tottenham Hotspur in the north London derby.

The Gunners came from behind to seal a 2-1 victory against Spurs on Sunday to dampen Tottenham’s hope for a place in the Premier League top four.

Erik Lamela – who replaced the injured Son Heung-Min in the 19th minute gave Spurs the lead with a stunning rabona finish.

Arsenal restored parity through Martin Odegaard, whose effort was deflected out of the reach of Spurs keeper Hugo Lloris.

The Gunners continued to dominate in the second half and took the lead from the penalty spot after 64 minutes when Alexandre Lacazette missed his kick but was fouled by Davinson Sanchez.

Lineker took to Twitter to share his reaction to the decision. He feels that it was clearly not a penalty.

I can’t see that as penalty. He’s miss-kicked it completely and booted him in the follow through. 🤷🏼

Former Spurs midfielder Jenas also appeared to have suggested that it was a wrong decision.

While Arsenal did a brilliant job in coming from behind to pick up all three points, questions once again should be raised about Jose Mourinho’s approach in big games.

And only after Lamela was sent off did they show positive intent which raises the question of why it took so long for them to change their approach.

In other news, Leeds United are set to compete with Arsenal for Patrick van Aanholt.