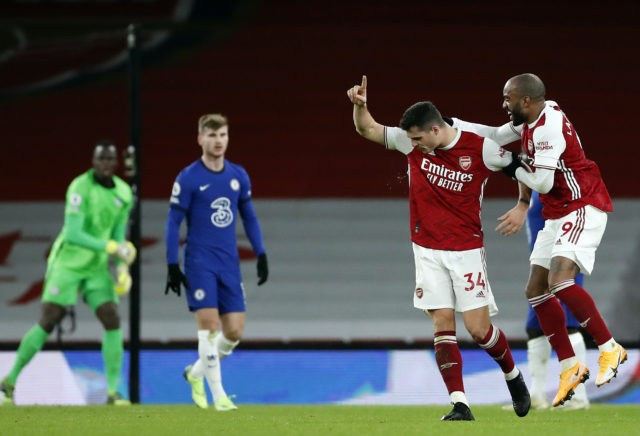 The Gunners ended their seven-game run without a win in the Premier League after beating their London rivals 3-1 at the Emirates, with goals coming from Alexandre Lacazette, Xhaka, and Bukayo Saka.

Under pressure manager, Mikel Arteta made a bold decision to start with a bunch of youngsters, and the team was in desperate need of Xhaka’s experience.

The 28-year-old left-footed midfielder – who grabbed the headlines recently after throttling Burnley’s Ashley Westwood – scored from a brilliant free-kick, while impressed with his overall contribution.

Crooks has claimed that when he saw Xhaka in the team picked against the Blues, his first reaction was Arteta had lost the plot.

However, he was surprised to see how Xhaka played such an ‘influential’ role in the win, as the Gunners earned their ‘most important result of the season’.

“When I saw Xhaka in the line-up to face Chelsea, I thought Arteta had finally lost the plot. How could any manager trust the midfielder, having practically throttled Burnley’s Ashley Westwood in a previous fixture, initiating his own downfall and marching orders during Arsenal’s hour of need?,” said Garth Crooks to BBC Sports.

“With Gabriel, Willian and David Luiz all out for various reasons and Pierre-Emerick Aubameyang on the bench, Arsenal were in desperate need of Xhaka’s experience in a team full of kids. What I didn’t expect was for Xhaka to play such an influential part in, what was without doubt, their most important result of the season.

“It takes manager Arteta off skid row, and puts some very important confidence back into a side that is struggling at the moment. The Swiss international’s free-kick to put Arsenal 2-0 up wasn’t bad either.”

It was indeed a massive win for the Gunners and one that could kick-start their season.

The north London club were in a spiral downwards following a series of poor results and were languishing in the bottom half of the table, fighting for survival.

Although their situation hasn’t changed massively, the victory would definitely give them a breathing space, and inject more confidence ahead of their busy festive schedule.

Xhaka received scathing criticism following his sending off against Burnley, and it’s his turn now to silence the critics with consistent performances going forward.