I found it hard to pick my game of the weekend as there wasn’t a stand-out fixture from the weekend’s action. Although there is a decent game at Old Trafford I’m going to plum for the Tyne and Wear derby for this weekend’s game.

Roy Keane’s Black Cats are a well drilled side who will give you 90 minutes every game and come off knowing that they could do no more. That’s the reason I feel they will survive this season.

The main problem for Keano is that the side don’t carve out too many clear-cut chances in away games, as Roy himself testified after the City game. Their home form is decent for a newly-promoted side though. The undoubted high-point at the Stadium of Light being the 1-0 defeat of Tottenham, but also decent performances in the 2-1 versus Reading and the unfortunate 1-1 draw against Fulham. 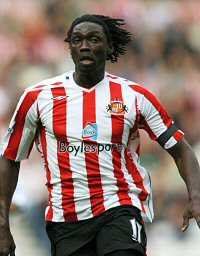 Another north-east derby this season saw Sunderland earn their draw at Middlesbrough in spectacular fashion through Liam Miller. This also proved to be one of the most topsy-turvy games of the season, brilliant box-to-box action rounded off by 4 great goals. I think though that maybe a key factor in the derby at the weekend though could be the return of Carlos Edwards to the right wing. His skill with delivery is excellent, and it could prove to be the missing part of the attacking jigsaw for Sunderland, for this season at least, as he could provide the consistently quality balls for his compatriot Jones to nod in.

Also I would look out for Michael Chopra, a boyhood Magpie and former player, who the Mackems are becoming to welcome as their own after a few good performances.

Key Player: I would say if he plays, Carlos Edwards, but more than likely it will be Kenwyne Jones. His role as target man tomorrow will be put to the test well and truly tomorrow against the Newcastle centre-halves. I think that if he is on form, its going to be tough for Newcastle.

The question posed from last week is what went wrong? Pretty much everything really. Their lack of pace at centre-half was exposed; their lack of any sort of midfield also. A 4-1 at home to any side is a disgrace, but for a side like Portsmouth (all respect to Harry Redknapp and his team of course) who Newcastle would expect to beat with 50000 Geordies behind them is horrendous. 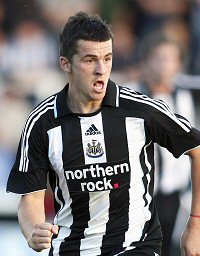 Newcastle are a club in crisis though. Pure and simple. Since Sir Bobby Robson left a few years back the club has never been the same. Graeme Souness did his Liverpool bit with Newcastle, shredding up the side too quickly and not buying where he ought to have done. Glenn Roeder had a couple of good results, but overall he wasn’t the right man. Now we have Big Sam, and it looks like nothing has changed in fairness, apart from the fact that the standard of football has plummeted to the depths of the Souness era.

I have never thought that Allardyce was the right man for the job; Martin O’Neill should’ve been given the job as soon as Souness was sacked. Look at the good that he is doing with Aston Villa now (the 4-1 at home to United aside). He has changed very little throughout the squad and still done well, which is a testament to his ability certainly as the majority of players there wouldn’t exactly make the Player of the Year nominations (Gareth Barry and Ashley Young aside of course, both have been magnificent this season).

The old adage goes that football matches are won and lost in midfield, and Allardyce certainly has a decent midfield. Emre, Barton, Butt, Geremi, Faye, all good players. The probable partnership in the defence will be Cacapa and Steven Taylor, who will have their work cut out with Kenwyne Jones. I think though that Taylor is a better defender than Jones is a forward though, he is just out of form. It’s going to be an interesting battle, that’s for sure. I would also expect Allardyce to revert to his favoured 4-3-3 formation, with the talismanic Mark Viduka returning to be the central lynchpin with Michael Owen and James Milner running off.

Key Player: Has to be Joey Barton if he plays. Okay, he hasn’t played too much this season but on his day he is by far one of Newcastle’s best players. He will need to dictate play, use his spectacular array of passing and if possible, his barn-storming right foot, if Newcastle are to triumph here.

This is a really tough one to call, just because it’s a derby. Personally I think that Newcastle have the better midfield on paper, but Sunderland’s attack could prove too strong for the ailing defence of the Magpies, which is why I’m going to give Sunderland a slight edge on Newcastle for this one.