21st November 2007: the half-time whistle in the 2010 World Cup qualifying game between Brazil and Uruguay is met with a cacophony of boos from the Maracanã crowd, disenchanted with the performance of their side, despite Luis Fabiano’s equaliser just before the break. Although Brazil went on the win the game 2-1 with a second from Fabiano, the growing disillusionment with the national side was plain to see and it has prompted many to analyse just where they are going wrong.

Uruguay went out with a simple game-plan; close-down in the defensive third and stop the ball reaching Kaka, Ronaldinho, Robinho and Luis Fabiano in attack. Their tactics worked to perfection, enabling them to dominate large periods of the game and eventually think themselves unlucky to have come away from the match empty handed.

Much of their success was down to the inability of Brazil’s defensive midfielders to pick out a pass to any of the attacking quartet. Gilberto Silva and Mineiro both put in deplorable performances, consistently giving the ball away with inaccurate passes and proving entirely incapable of building attacks for their side. When you consider the illustrious names that have worn the number five and number eight shirts for Brazil in the past, the current two inhabitants leave a lot to be desired.

Arséne Wenger has never been a manager that will allow a player to hang around past their sale by date. The fact that he appears to gradually be phasing Gilberto Silva out of his Arsenal plans should come as a good indication to the Brazil coach Dunga that the time is right to find a replacement for the thirty-one year old. Similarly, his partner in crime Mineiro is thirty-two years old and seemingly declining with age.

What Dunga should be looking for when lining up possible replacements for his ageing defensive midfielders are players who can not only sit in midfield and do the dog-work, but are also proficient with the ball at their feet and able to supply the players in the attacking third with accurate passes. It would only take one trip to England for Dunga to discover that there are a couple of players in the Premiership who fit this description to the tee.

Anderson has been a revelation for Manchester United since joining from FC Porto for a reported £17million in the summer. It only took the young Brazilian a month or so to tune into the pace of the Premiership and since then he has performed impressively in almost every game he has played. Not only is he keeping a full England international in Michael Carrick out of the side, but in two of United’s biggest games of the season he has been able to keep Cesc Fabregas and Steven Gerrard quiet for nearly the entire ninety minutes.

The biggest surprise with Anderson’s form, especially for those in Brazil, is that he has been playing in a flat, almost defensive midfield position that he has never previously occupied. Whilst coming up through the ranks at GrÃªmio he was always used as a support striker or in an attacking midfield role and this continued through his time at FC Porto. The fact that he has not only slotted into a new footballing culture, but has learnt a new position at the same time, makes his current form even more outstanding than it may at first seem. 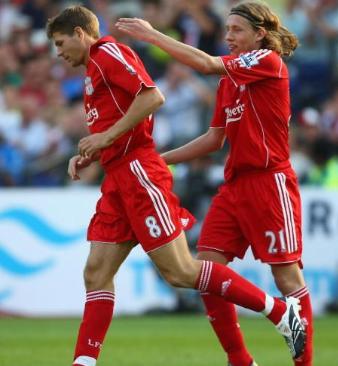 Across the Manchester/Liverpool divide lies another product of the GrÃªmio youth academy, who could prove to be the ideal partner for Anderson in the Brazil midfield of the future; Lucas Leiva. Although he has only made sporadic appearances for Rafa Benitez’s team thus far, he has looked assured when he has been given playing time and has certainly not been at all fazed by the pace and intensity of the Premiership. He has not pulled out of rough challenges that other newcomers to the league may have avoided and has impressed with the range and intelligence of his passing.

Whilst at GrÃªmio, Lucas became the youngest player ever to win Placar Magazine’s Golden Ball award for the best player in the Brazilian Championship, as his side finished third in their return season in the top flight. He was also an instrumental part of the side that made it to the Copa Libertadores (South American Champions League) final this year. He is clearly a born winner as well as an excellent footballer.

Both players possess strength in the tackle and finesse with the ball at their feet, and it would therefore seem certain that Anderson and Lucas Leiva represent the future of Brazil’s defensive midfield. With one left footed and one right footed player, they would provide an ideal balance in that area of the field and would give the team much more fluidity than the current incumbents of the positions.

Denilson of Arsenal should also not be discounted, as despite stalling slightly with his development this season, the former São Paulo player still looks to have all the tools necessary to be a competent defensive midfielder. Whether or not he is able to reach his potential, considering the multitude of players ahead of him in the Arsenal pecking order, is another matter.

The South American qualifying group does not reconvene until June 2008, so Dunga has plenty of time to experiment with his line-up in friendly matches in order to find a way forward that is satisfactory to both him and the Brazilian supporters. Whether or not he will decide to blood both Anderson and Lucas Leiva together is unknown, but if they can both hold down regular starting spots with their respective clubs, there is no reason why both of them should not be in consideration for a place in the starting eleven against Paraguay in June.