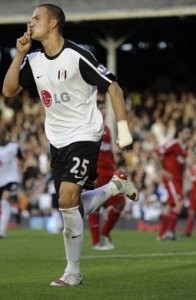 Juventus will begin the UEFA Europa League round of 16 with a first leg match against English Premier League side Fulham on Thursday.

Fulham, who are currently 10th in the Premier League, defeated reigning UEFA Cup Champions Shakhtar Donetsk in the round of 32. They were not expected to advance past the Ukrainian side but a 1-1 draw on the road was enough. Manager Roy Hodgson has instilled a discipline 4-4-2 system that has made Fulham one of the strongest defensive side in England.

Juventus have had a rollercoaster season that included being near the top of the table to start the Serie A season and then dropping to as low as 7th place. They are in 6th place in the league table heading into Thursday’s match. Juventus advanced to the round of 16 with a 2-1 aggregate win against Ajax Amsterdam.

Both sides will be missing key players for Thursday’s match. Juventus is without goalkeeper Gianluigi Buffon, Giorgio Chiellini, and Amauri. Fulham is missing Andrew Johnson, Clint Dempsey, and John Pantsil for the trip to Italy. Juventus will be favored in the home match but Fulham have surprised in the Europa League.

Fulham will be satisfied with a draw and if they can get an away goal. It should be Juventus attacking in the match and Fulham looking for chances on the counterattack. Bobby Zamora leads Fulham with three goals in the Europa League while Amauri has two for Juventus.

You can watch Juventus v Fulham live online as well as all other Europa League games. Read our live Europa League football page for more details.