The 19-year-old defensive midfielder has been linked with top English clubs in the past like Manchester United and Liverpool, while back in the January transfer window, French newspaper Le Parisien claimed Chelsea are leading the chase to sign him.

Last month, The Guardian reported Arsenal have joined the race too, with Arsene Wenger sent scout Gilles Grimandi to track the youngster regularly this season. 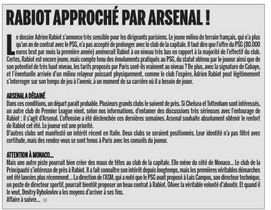 Rabiot has a year left on his contract and has refused to renew it. He reportedly earns £5,000-a-week, but wants a significant pay rise around £60,000-a-week, which Chelsea are willing to offer.

He feels the club’s offer is not good enough considering the wage structure at the French club and the potential he showed. Yohan Cabaye’s introduction in the January transfer window along with the possible arrival of another top midfielder in summer makes him question whether staying at PSG would at all be the best idea for his development.

French magazine Le 10 sport reports that an exit is probable and many big clubs are vying for his signature. Arsenal have now joined the race for Rabiot and have made him a priority for this summer. Monaco are also interested as well as two unnamed Italian clubs.