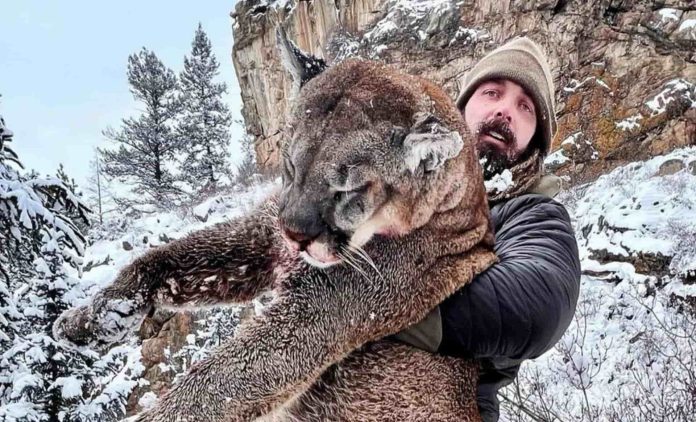 Ex-NFL star Derek Wolfe has been slammed by shocked fans across social media after being pictured hoisting up a huge mountain lion that he personally hunted and killed.

The former Denver Broncos , for whom he won the 2015 Super Bowl, and latterly Baltimore Ravens defensive end has been heavily criticised by horrified fans after it emerged the 32-year-old had killed a mountain lion.

The creature had, according to Wolfe, been ‘wreaking havoc on a rural neighbourhood’ after he revealed a mule deer and two dogs were found dead on an Instagram post.

It is no secret the 2022 retiree is an avid fisherman hunter and spends much of his time tracking down animals, but after hearing a woman’s plea for help after her two dogs went missing, he decided to make an apparent 9,600 foot hike up the mountains of Colorado and take matters into his own hands.

“Exhausted, dehydrated, cramping I drew back my bow and sent an arrow through him,” Wolfe wrote on Instagram. “Then I had to crawl backwards down the mountain with him to get him to the truck.” 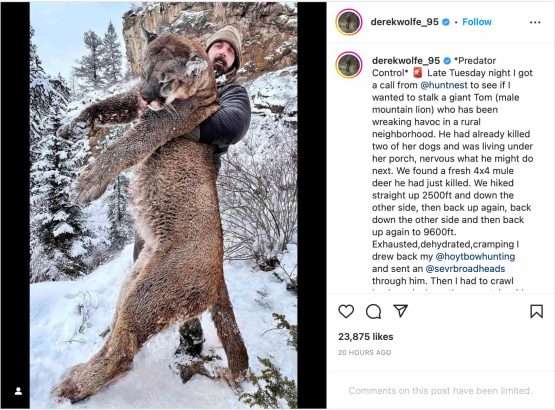 Wolfe, who stands at roughly six-foot-five, can be seen holding the enormous mountain lion after managing to hunt it down and kill it, while he also added that it was likely around 195 pounds.

Another trophy to add to the cabinet perhaps for the second-round pick (36th overall) by Denver back in 2012. The Broncos defensive linesman spent eight years in Colorado where he now resides, and by the looks of it, enjoys hunting wild animals such as elk, deer and bears.

I think this guy is an asshole. https://t.co/hQV1f3PHNa

Who wants to see a washed up football player who did PEDs, made a career of being on the "injured reserved" list and now kills cats for fun?

Hard pass. #DerekWolfe is an embarrassment to Elway and the Broncos. Go climb a mile high and disappear.

Derek Wolfe the 2020 season with the Baltimore Ravens before bringing down the curtain on his career in 2022.