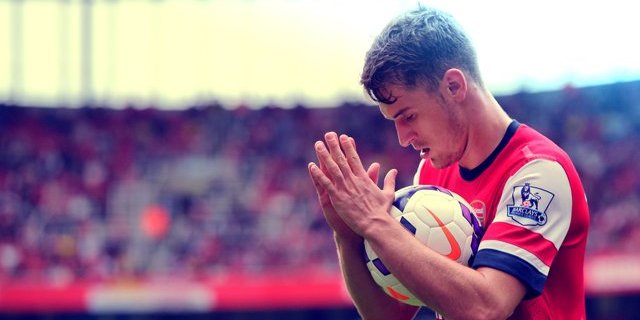 Former Arsenal striker John Hartson has claimed that as many as ten clubs will be interested in star midfielder Aaron Ramsey this summer, but that it would be a shock if the 22-year-old leaves the club during the impending transfer window.

Hartson, speaking to the BBC ahead of Saturday’s FA Cup final between Arsenal and Hull City, said that the Welsh international has made a name for himself this season after some barnstorming displays from midfield, and that he will be one of the most sought after players of the summer:

“Aaron Ramsey will be linked to 10 clubs in the summer,” Hartson said.

“But I can’t see him leaving Arsenal in the foreseeable future. He’s settled and loves the club.”

“Let’s not forget 18 months ago at Arsenal he was facing a bit of a backlash from the home fans. They were thinking, ‘he’s not really stepped up his performances’.

Ramsey has come in for some criticism over the past few years, with some Arsenal fans questioning if he would ever fulfill his undoubted potential.

But this season, bar a spell on the sidelines, Ramsey has been sensational, and Hartson expects plenty of bids from rivals this summer, despite his evident happiness at the club,

“He may feel ‘I’ve had one outstanding season and Arsenal stuck by me when I wasn’t playing that great a few years ago’.

“When he does get linked and when bids come in for him that tells you he’s doing exceptionally well.”

“But he’s found something. He’s gone up a gear and he’s so influential to Arsenal now and the way they play.”