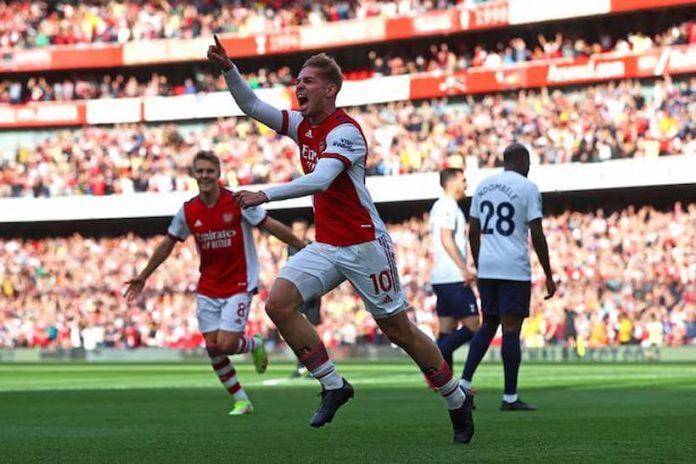 Following an energy-sapping game against Liverpool in the EFL Cup on Thursday, Mikel Arteta’s Arsenal make the short trip across north London for a derby game with Antonio Conte’s Tottenham Hotspur this Sunday, and 888sport has enhanced odds on either side emerging with three crucial points.

Join 888sport to get enhanced odds on Tottenham Hotspur vs Arsenal

UK Premier League betting sites are by-and-large broadcasting odds of around 29/20 on Spurs winning the crunch north London derby game against Arsenal, and 15/8 odds on Arsenal upsetting the home crowd with what would be a big win.

At 888sport, however, it’s possible to get enhanced odds on either side winning – the bookmaker is offering Spurs at 12/1 and Arsenal at 15/1!

To put this into context, a £5 bet on Spurs beating Mikel Arteta’s team at regular 29/20 odds would payout approximately £12.25 (including the £5 stake).

Football Betting Tips: Tottenham Hotspur vs Arsenal – How to get 12/1 odds on Spurs and 15/1 on Arsenal at 888sport

To place a wager using enhanced 12/1 odds on Tottenham Hotspur to win, or 15/1 on Arsenal at 888sport, just follow these simple steps:

Tottenham Hotspur vs Arsenal Betting Tips: Why bet on Spurs to win?

Despite the slightly superior odds available on Bakary Saka and co in the north London derby, we’re leaning towards Spurs for this game: