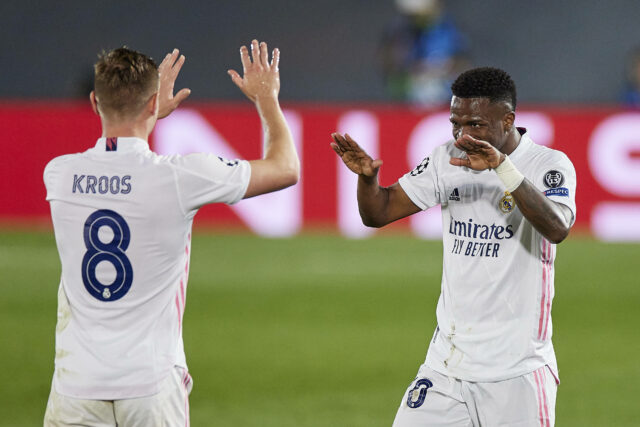 Real Madrid will look to control and defeat Inter Milan as both teams clash in group D’s Kingship decider at the Santiago Bernabeu.

The two sides will meet on the 7th of December at 21:00 BST.
Real Madrid will host Inter Milan in Europe for the ninth time in history. Out of the previous 8 times, Real Madrid have won seven. The only home defeat Los Blancos have suffered to the Italian outfit came in the 1967 European competition.

Therefore, if Inter Milan wins this match, they will advance to the top of group D while breaking a record that is almost 55 years old.
Inter Milan are second in Group D with 10 points, just 2 points behind Los Blancos.

It is noteworthy that Real Madrid have scored at least twice in their last 6 matches against Inter Milan. This season, Real Madrid has scored 12 times in the Champions League. Inter Milan has scored 8 times. This might be a game with at least 3 goals as we should probably expect Inter to score at least one goal.

Real Madrid will be without the services of Karim “the dream” Benzema. The prolific goalscorer who is La Liga’s top marksman so far this season is out with an injury.
However, Real Madrid can still count on the firepower of Vinicius Jr., who has been firing on all cylinders. Bale and Ceballos are also out of the squad with injuries. Mendy and Casemiro are at risk of missing the UCL Round-Of-16 if they get booked again.

So, Don Carlo Ancelotti might leave them out of the starting lineup. Manager Carlo Ancelotti has said he won’t be rotating his squad. So, we might as well expect to see the trio of Modric, Toni Kroos, and Casemiro. Valverde and Camavinga are up for selection, and the team could do with some fresh legs. Jovic has also impressed in recent days, and so, he will most likely get a chance as Benzema’s replacement for this match.

Nerazzurri have a boost with Stefan De Crij and Lautaro Martinez cleared for Tuesday’s match against Madrid. However, injuries persist as Aleksandar Kolarov, Matteo Darmian, Andrea Ranocchia, and Joaquin Correa are not selected. Arturo Vidal could also be absent.
There has been much hype in Inter in recent weeks. Coach Simone Inzaghi had received lots of plaudits for his work in Inter, and he believes Nerazzuri can hurt Los Blancos if they “show a little more than in first match.”

Both teams come into this match in such strong forms. Real Madrid has only lost 2 matches this season, with 1 loss coming in La Liga and the other in the UCL against Europa-bound Sheriff. This season, Los Blancos have 4 wins in 5 UCL games, and they are on glorious winning form.

The latest betting odds for Real Madrid vs Inter Milan are from BetUk.

Real Madrid and Inter Milan are both on good form. Sportslens expects Real Madrid to win just like most of the top football betting sites. This is because Real Madrid and other Spanish sides seem to have the key to Inter Milan. As good as this Inter Milan side are, they are unlikely to stop history from repeating itself.