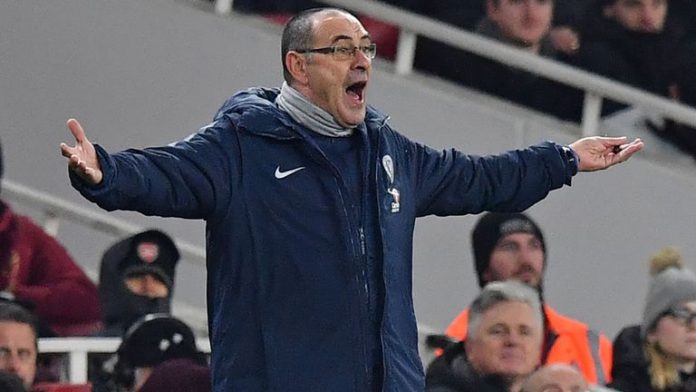 Liverpool and Manchester City continue to go head-to-head for the Premier League title after recording victories in the latest round of games.

Jurgen Klopp’s side were pushed hard by Crystal Palace before securing a 4-3 success, while City ran out comfortable 3-0 winners at Huddersfield Town.

Maurizio Sarri didn’t pull any punches after Chelsea’s defeat at Arsenal on Saturday as he slammed his players’ mental approach to the game.

Sarri accused Chelsea’s players of being a soft-touch and it was impossible to argue with his viewpoint after they were run ragged by the Gunners.

Certain elements of the Blues’ squad haven’t taken kindly to critisism in the past – it will be intersting to see whether Sarri’s outburst has a postive effect over the next few weeks.

Their intensity was too much for the Blues to handle and it would have been no surprise to see them win by a much bigger margin.

There are now just three points separating Chelsea, Arsenal and Manchester United in the standings – the battle to finish in the top four could be epic.

Rashford continues to sparkle under Solskjaer

His goal against Brighton & Hove Albion was simply superb and he is blossoming now he has been handed an extended run in the starting XI.

Rashford’s form means that Romelu Lukaku will find it difficult to force his way back into the line-up and his future at Old Trafford does not look rosy right now.

Spurs sneaked a 2-1 win at Fulham on Sunday, but another injury to a key player could yet derail their challenge for a top four place.

Dele Alli has already missed nine games this season with hamstring problems and the way he went down late in the game holding the back of his leg did not look good.

With striker Harry Kane out until March, Spurs desperately need to bring in some reinforcements before the January transfer window closes.

Ruben Neves and Joao Moutinho have been an integral part of Wolverhampton Wanderers’ impressive form this season and the pair were the key to their 4-3 success over Leicester City on Saturday.

The Portuguese duo were superb, with Moutinho setting up the first two goals and Neves creating the third and fourth.

While everyone around them seemed intent on making this one of the craziest games of the season, their extra quality in the middle of the park shone through.