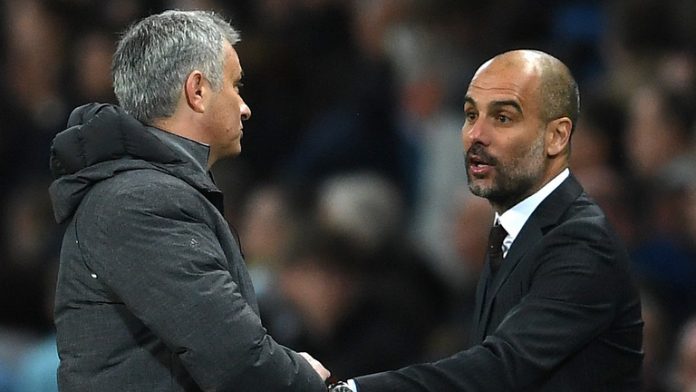 Another epic weekend in the Premier League is in the record books and it’s one that will probably go a long way to determining the destination of this season’s title.

Manchester City’s win at Old Trafford on Sunday left them with an 11 point lead over Manchester United and that advantage is one that Pep Guardiola’s side are unlikely to throw away.

Sportslens takes a look at the top five talking points from the weekend.

Give City the trophy now

Man City’s victory at over United has surely ended this season’s title race?

City now lead by 11 points and despite their being 22 games left to play it’s highly unlikely Guardiola’s side will relinquish their grip on top spot.

They have now been victorious on the grounds of Chelsea and United – that’s the form of champions.

If there are any Everton fans still unhappy with Sam Allardyce’s appointment, Sunday’s draw at Liverpool should have gone a long way to pacifying them.

Yes, it wasn’t pretty at times, but many pundits fancied the home side to wipe the floor with their local rivals and it didn’t happen.

Wayne Rooney’s penalty 13 minutes from time sparked joyous celebrations and will hopefully provide a platform for Big Sam to build something exciting at Goodison Park.

Wilshere makes his point to Wenger

Arsenal looked like they were heading for a defeat at Southampton on Sunday, but Jack Wilshere’s introduction after 69 minutes changed that.

The England midfielder added urgency to Arsenal’s play and, along with fellow substitute Olivier Giroud, ensured that the Gunners secured a point.

However, results like this show that Arsenal are still a long way short of being able to challenge for league honours.

Christian Benteke’s was totally selfish in wrestling the ball from Luka Milivojevic in stoppage time only to miss the penalty which would have boosted Crystal Palace’s hopes of avoiding the drop.

Benteke has subsequently apologised, but the two points Palace missed out on could be crucial come the end of the season.

The Belgian’s current form must be a worry for manager Roy Hodgson and Saturday’s antics will have done him no favours.

Both sides looked poor, but the goal will give the Swans some much-needed confidence ahead of Man City’s arrival on Wednesday.

Bony will be the key to Swansea’s survival fight and his goal will be a major boost to manager Paul Clement.