Arsenal and Manchester United are the two English clubs linked with a move for Colombian sensational Juan Cuadrado recently. There have been an interest from Barcelona as well, as the Catalan giants are looking to replace the veteran Dani Alves with the Fiorentina superstar.

Catalan newspaper Sport has been covering this Cuadrado saga for sometime now. They believe the player personally wants a move to the Nou Camp, however expects tough fight from English clubs. 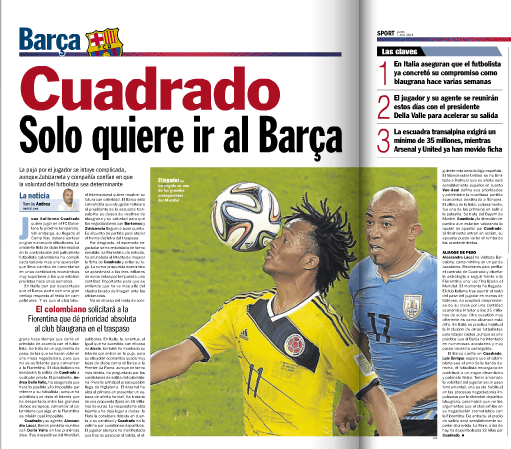 According to report from Sport, Arsenal have already made a bid of €28m for the highly rated wing-back/winger, however it has been rejected though as Fiorentina won’t even negotiate below €35m.

Arsenal have long been interested in Cuadrado, who has had a great World Cup campaign in Brazil. The Gunners need a strong right back to fill the void left by Bacary Sagna and are thought to be closing on a deal to sign Mathieu Debuchy from Newcastle United.

Manchester United have been linked with Cuadrado as well but forgive us if we refuse to give any credence to it. United have other priorities and probably Cuadrado is not the type of player they need immediately.