Marouane Fellaini’s father is not happy with the way English press are trying to project his son’s elbowing of Joe Allen in Belgium’s recent international match against Wales.

This image and video clip went viral in the social media during and after the match. Liverpool fans are naturally furious with this strong physical challenge from Fellaini, while United camp tried to defend their player. 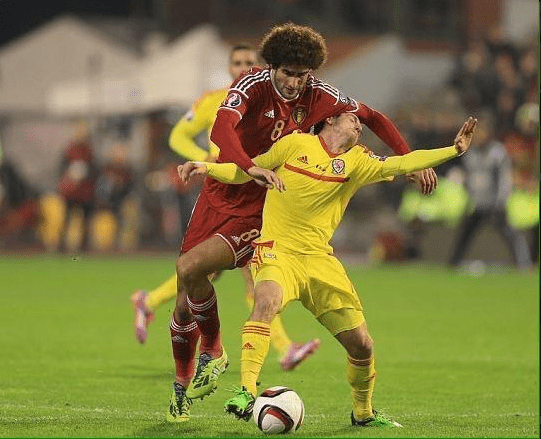 Fellaini’s father thought he should shed some light on the matter as well. He says that his son has been wrongly criticised as he had no intention to hit someone on purpose. He feels that it’s an accident taking into account the distance travelled by both the players to get the ball.

“Marouane did not do it on purpose,” says father Abdellatif. “Did you see how those Welshmen put their foot? Did you see what they did to Mertens? There had to be virile played, and that made Marouane. But he never wanted to injure someone.”

“Marouane in his career has never injured anyone intentionally. Do you remember that Greek Liverpool (Sotiros Kyrgiakos in February 2010 in the derby Liverpool-Everton, ed.)? Besides, you must also realize that Marouane is tall. If he goes in duel with a small player, there are elbows at the height of the face of his opponent. Against his will. He knows himself that he is not a dirty player and can look straight into the mirror.”

Fellaini’s father feels that his son has somehow picked up a bad reputation for himself. And that’s why every action of his is being criticised badly.