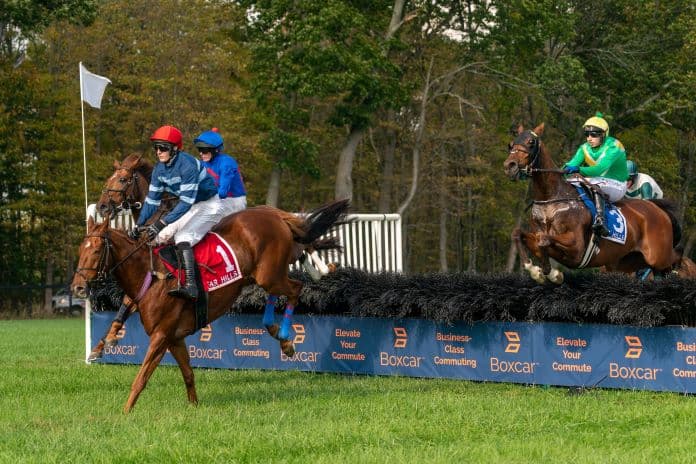 Far Hills race meeting is getting ready for their biggest day on the US jumps horse racing calendar this Saturday (Oct 15), as the New Jersey track stages their one-day American Grand National fixture.

So, to get horse racing fans in the mood, here are some fun facts about the Far Hills race meeting and also their big race – the American Grand National.

American Grand National 2022: When Is The Race?

Take your horse racing betting to the next level with BOVADA and receive a 75% matched deposit welcome bonus (up to $750) to use on the 2022 American Grand National – plus more free horse racing bets below.

Yes, steeplechase racing in the US plays second-fiddle to the more popular flat action and with the Breeders’ Cup fixture at Keeneland less than a month away, then this Saturday’s jumping card at Far Hills, New Jersey can often get overlooked.

However, the New Jersey horse racing powers have given the Far Hills race meeting a shot in the arm in recent years by halting any action at near-by Monmouth Park and Meadowlands to give the Far Hills action, that also includes the American Grand National, the full attention of thoroughbred racing enthusiasts.

With the Far Hills race meeting also only a short ride from New York City too, then getting to the New Jersey track isn’t hard and the course can expect another bumper crowd of 50,000+ descending on them – oh, and considering the population of the Far Hills area just around 1,000, then it’s a big payday for the community.

Believe it, or not, jumps racing in the US has been around a while. The Far Hills race meet is now in its 101st year and run on the same site during that time. The only times the fixture hasn’t been staged was in 2020 due to Covid and back during World War II, but other than that the residents of New Jersey have hosted the event for over 100 years.

Ron Kennedy (chairman of the Far Hills Race Meeting) said “It is great to reach 101 years of tradition here at Far Hills Race Meeting. We have worked hard over the years to ensure our charitable efforts are improving community health and outcomes in the region. We’re honored to welcome our Far Hills family back for another year of making FHRM history.”

In recent times, the US barn to look out for when it comes to the American Grand National is Cyril Murphy. The yard landed the race in 2015 and 2016 when Dawalan and Rawnaq (watch below) took the gold medals, with jockeys Ross Geraghty and Ruby Walsh doing the steering. This year, Cyril Murphy could have Belfast Banter in the race as he eyes up win number three.

Jockeys Craig Thornton (2) and Jody Petty (3) shared the success on McDynamo during his winning spree. The horse also won the Eclipse Award for champion steeplechaser three times (2003, 2005 and 2006) and entered the US racing hall of fame in 2013 after retiring with just over $1,300,000 banked in total prize money.

4. The American Grand National Has Produced Winners Aged Between 5 and 12

There is no real age trend when it come to the American Grand National. In recent years, back to 1998, the race has produced winners aged between 5 and 12!

Last year’s winner The Mean Queen took the spoils as a 5 year-old, while in 2017 Mr Hot Stuff was 11 and back in 1999 Ninepins was a 12 year-old hero. This all suggests both the young and old are worth considering ahead of the 2022 American Grand National.

5. The American Grand National Was Once Called The Breeders’ Cup Steeplechase

Not so long ago the American Grand National was actually known at the Breeders’ Cup Steeplechase. This version of the race dates back to 1986 when staged at a similar-named track – Fair Hill Race Course in Cecil County.

Being staged close to the annual Breeders’ Cup fixture each year, the race was also once considered to be a part of that meeting, but not on the main program.

Then up till 1993, the race was staged at Belmont Park on Breeders’ Cup preview Saturday.

6. UK and Irish-trained Horses Have Won 2 Of The Last 3 American Grand Nationals

It’s not just the home-grown US horses that have targeted the race, as word has spread across the Atlantic to England and Ireland, where jump racing is much more popular.

In the last three years, we’ve seen winners for the powerful UK yard of Nicky Henderson when his Brain Power won in 2019, while a year prior the three-time English Grand National winning yard of Gordon Elliott took the first prize with Jury Duty.

The race has also been given a boost and a higher profile in 2022 with Fox Sports agreeing to show the race live on their channels.

The American Grand National is one of five Grade 1 jumps races on the schedule this year.