It was reported on Daily Mail that Jose Mourinho will travel to Brussels for the international friendly tie between Belgium and Colombia to watch potential Chelsea target Radamel Falcao.

Portugal newspaper O Jogo speculates that Jose Mourinho’s scouting mission probably will not be limited to just one player, but multiple of stars from either side. Chelsea’s strike problem has been well documented in the press, and although Fernando Torres has hinted of returning back to form , top strikers still getting linked with the London club. 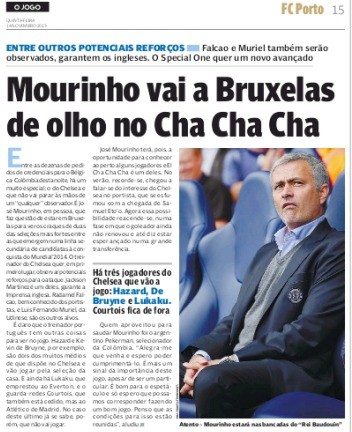 According to the report, Mourinho could also keep an eye on Jackson Martinez, who has hinted of summer move away from Porto and highly rated Udinese striker Luis Muriel. Martinez has already scored 9 goals this season, more than all Chelsea strikers combined, while Muriel was a reported target of several Premier League clubs like Manchester United, Liverpool and Arsenal.

Of course, he will be keeping a close eye on his own players too like Eden Hazard, Kevin de Bruyne and Romelu Lukaku, who has been sent on a season-long loan to Everton.

Mourinho could also take a note of Belgian idfielder Steven Defour, who is very highly rated in Europe. Frank Lampard is at the apogee of his career, while other youngsters at the club has yet to establish strongly in the side so Mourinho could be looking for a class midfielder elsewhere in the coming transfer window.