He is arguably the best player in the English premier League at the moment and certainly the best young player on English soil. He is 5’11”, possesses a boyish face and an equally boyish charm but exhibits a very much mature character on the football pitch. He is the most crucial member of the most entertaining team in the Premiership and has already established himself as a key figure in his national football team. 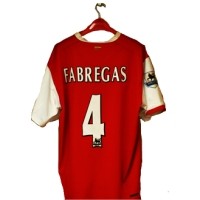 You hardly need to be an cryptologist to decipher who the player in context is. Yes, it is one Francesc FÃ bregas Soler, preferably called “Cesc”, who might be still only 20, but is already rated as one of the finest and most gifted footballers on the planet. So much so that this current Arsenal squad that oozes aestheticism from every pore is most dependent on him for inspiration and guidance.

A Catalan by birth, Cesc moved to Arsenal from FC Barcelona in the 2003 summer at a time when he was just over 16 years of age and scored on his second ever appearance in Arsenal colors, hitting one of the 5 goals that rampant Gunners stormed past Wolverhampton Wanderers in the Carling Cup. 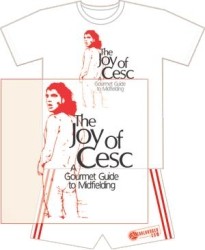 Cesc’s entry to the Arsenal first team in the Premiership in the 2004-2005 season was observed by most as a stop-gap measure for the absence of Patrick Vieira, Gilberto Silva and Edu but he soon transcended the bar and became the lynchpin of this exciting and young Arsenal squad that manager Arsene Wenger has so painfully and meticulously assembled and developed through a truly excellent youth system.

With Vieira’s departure in the summer of 2005, Ces was asked to play the midfield role and boy, didn’t the Spaniard play his part! Cesc was pulling the strings from the centre of the midfield as Arsenal strolled to the UEFA Champions League final in 2005-2006 only to be beaten by Barcelona in the final. Although Arsenal didn’t win any silverware, it was FÃ bregas’ rise that set the tone.

Last season again FÃ bregas was brilliant. More than anything, he became better with every game and at 20, he is already a full fledged Spanish international and is a regular first team player too in a squad that has loads of talent and quality in every department. Cesc again emerged as the best Arsenal player last season as Thierry Henry fell out Arsene Wenger (apparently) and fell out of the pitch due to injuries. 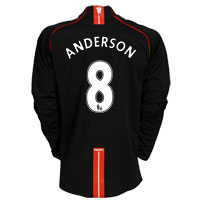 Compare Cesc with Anderson, the Brazilian Anderson who was signed by Manchester United for a staggering £17million from FC Porto in the summer and you do have a considerable amount of fodder for a debate. The 19-year old Anderson LuÃ­s de Abreu Oliveira made his first club football breakthrough at the Brazilian club Gremio but lasted only just 5 matches in the first team after spending years at the club’s youth academy.

Not that he turned out to be an ugly duckling or a very naughty boy but because that Portuguese giants Porto got so indulged by him that they decided to sign him, just as they had signed the Brazilian talent Diego, before the bigger clubs of Europe could hawk. That was in December 2005 and helped Porto win the domestic league. Next year too Anderson was celebrating another title victory but those celebrations were certainly decimated by the fact that he had missed five months of the season with injury. 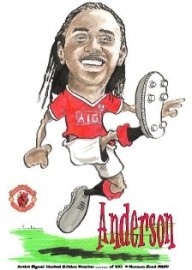 This summer Sir Alex Ferguson and his money spinning Manchester United side got so interested in the player that a deal was as soon as (well, almost) as soon as the interest as conceived. And on the account of the performance displayed by the Brazilian, who is already a full-capped international for his nation that money doesn’t appear to have been wasted.

Anderson might not have made as many starts as a player with his reputation would have liked to but he has definitely had had his moments. Especially against Arsenal earlier this season when he was pitted against the best playmaker in the Premiership at the moment Cesc FÃ bregas and dominated possession and midfield; to be honest, Anderson was better than his Spanish counterpart in the dual between Manchester United and Arsenal.

But Anderson’s best performance to date has come in Manchester United’s 4-0 win over relegation favorites Wigan Athletic at Old Trafford in October when he fashioned a brilliant through ball for Carlos Tevez to hit the back of the Wigan net. Anderson has been quite decent, if not good, in the UEFA Champions League although it must be said that he is yet to score his first goal in Europe for Manchester United.

So who is the better player between FÃ bregas and Anderson?

Both are of about the same age and both play in a similar position. At the moment of course, Cesc is by far the better one. With his playmaking prowess and boyish enthusiasm mingling well with great maturity, Cesc has become one of the best in European football. But Anderson is just starting on the voyage and is anticipated to come big in the next couple of seasons. Several football pundits say that Anderson has been signed as a long term replacement for Paul Scholes and that tells really. 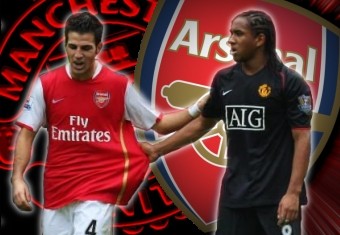 Who do you think is the better player and why?