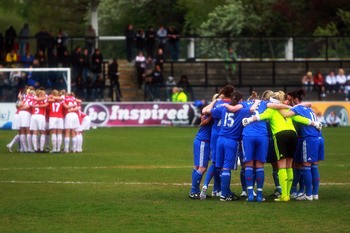 2,510 people in the crowd witnessed Arsenal winning the tight contest 1-0. Gilly Flaherty scored the only goal of the game in the first half and they held on well against some good second half pressure from Chelsea.

“The launch was a terrific success. The attendance was higher than expected and the pre-match entertainment kept the audience lively until kick-off. Both teams produced a good standard of football. The league, I am sure, will grow from here.”

Chairman of the FA, David Bernstein, was in attendance, as was Sir Trevor Brooking and England Women’s coach Hope Powell. Various celebrities also watched the launch of a new era in women’s football.

ESPN is the broadcast partner and it will show weekly highlights every Tuesday at 1830, as well as a selection of live matches.