The great rotation debate has reared its head again in recent days as Liverpool fans come down on their manager, blaming his rotation policy on recent poor results. Fans don’t have an issue with rotation per se, but with the extent of the rotation policy, injuries and suspensions not withstanding.

Managers on the other hand have been telling us for years that it’s a necessary evil, given the number of competitions and games their teams are forced to play each season. If we take the so called big 4, there is every likelihood they will compete to the later stages of the various competitions they enter and hence end up with 60+ games a season. So let’s explode this myth!

When Liverpool were collecting trophies in the late 70’s and 80’s how many games a season were they playing? Try 60+! In those days there were 42 league games, frequently 2nd or even 3rd replays in the FA Cup and nobody put out their reserves in the League Cup. Granted there were fewer games in the European Cup but overall it’s a myth to suggest that players play more games
now. Yes there are more internationals now but the top managers regularly pull players out of internationals for negligible reasons.

While the big 4 contain massive squads with 20+ internationals, financed by the wealth of the modern game, back in the 70’s and 80’s most managers played their best team out of necessity (the choice was limited) and you’ll find that in some cases the successful sides only used 15 or 16 players in a season. 15 or 16 players doesn’t see a Premiership team through a fortnight these
days.

The next argument we get is that the game is much faster now and the physical demands greater. Yes and no! The game is faster but the physical demands aren’t greater. Get some videos of the days of Chopper Harris, Norman ‘Bite Yer Legs’ Hunter or Tommy Smith. These were the days when you had to remove a limb to get booked. The sliding tackle from behind with a double twist and full knee follow through was considered an art form and if you didn’t like it you could take up ballet. Anyone diving would be smacked around the dressing room after the game….by their own team mates. The propensity for injury was way higher than today.

So the next time Fergie, Arsene or Rafa start bleating about rotation tell them to come clean and call a spade a spade. They rotate because there is no other way to keep squads of 20 to 30 top players happy unless you give them all some playing time. Valid reason but please drop the myths.

Now back to the fans perspective. Basically it goes like this. If you have to rotate then just rotate 1 or 2 players each game. Rotating 4 or 5 destroys continuity and results suffer. But let me counter with: What about the multi million pound squad? Aren’t
they all internationals and wouldn’t they walk into any other (non top 4) Prem. side? Don’t you fans argue endlessly about the quality of your 2nd team, lauding it over your rivals? Why then can you not rely on players coming in and getting the job done?
I believe that for the top teams they can do this using rotation but there is another problem that is being misdiagnosed.

It’s not about rotation it’s about formation!

Let’s look at Man Utd firstly. It has been a hallmark of Fergie’s teams in the Premiership era that they operate a 4-4-2 formation with 2 orthodox wingers. Fergie has built successive squads without breaking from this formation. The key then to the squad is having players who fit exactly to positions. So, for example, Fergie will rotate Nani with Giggs, Hargreaves with Carrick, Anderson with Scholes, Saha with Rooney/Tevez. The point is the player coming in plays in exactly the same position within the system as the player he rotates with. Hence each player knows his and every other players role in the team and becomes familiar with the pattern of play. It should only become a problem if injuries and suspensions force a formation change. 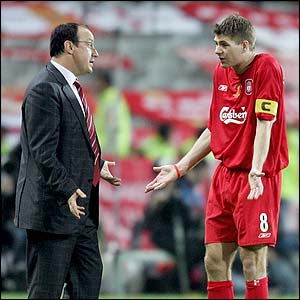 Now let’s look at Liverpool and Chelsea. What is their formation? Good question. At the core of the criticism directed at Mourinho before he quit Chelsea was that they played dull football. I believe this is because Mourinho had no set formation and it is questionable whether he ever knew what his best team was. Here’s how it works (or in this case doesn’t work). If one match you play Robben and Cole wide with (say) Essien and Lampard in the middle and the next week its Lampard, Ballack, Obi and Essien, there’s a problem.

Playing with two wingers is very different to playing with 4 orthodox midfielders. With Chelsea and Liverpool some weeks it’s 2 wingers, some weeks 1 and some weeks none. The formation also varies within matches depending on the use of substitutes.

With the pace of the modern game players need to be able to do things instinctively. Having to readjust for the width or lack of width in midfield and, from a strikers perspective, adapt constantly to receiving the ball from totally different angles, for me, is the key factor and not the quality of the players being rotated.

Granted it is preferable not to rotate a large number of players at once and no matter how good the squad some players will always be better than others but I believe having a formation, sticking with it, and building a squad to fit to the positions in that formation can breathe a level of familiarity into the equation which eases the risk of player rotation.