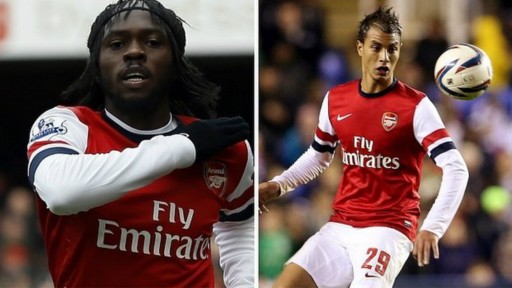 Arsenal continue their mass exodus this season, as manager Arsene Wenger has confirmed the departures of two more players – Gervinho and Marouane Chamakh.

The Gunners have received a financial boost this season with a reported £70 million transfer war-chest, but so far only one player has been signed, youngster Yaya Sanogo from Auxerre on a free transfer. However, they have able to offload as many as 25 players from the squad, including some big names like Arshavin, Denilson, Andre Santos et al.

Gervinho, who joined from French outfit Lille in the summer of 2011, for a reported fee of £11 million, has joined Serie A outfits, Roma after enduring a rather disappointing campaign last season.

Chamakh, joined a year earlier, with lots of promise from French club Bordeaux on a free transfer and is set to join newly promoted side Crystal Palace, but the nature of transfer (whether on loan or permanent basis) is yet to be decided.

The 26-year-old Gervinho, who was transformed from winger to a more central role since his move to the Emirates, has netted 11 goals in 63 matches, is set to reunite with his former boss Rudi Garcia at Roma.

Chamakh has rather cut out a more sorrow figure, despite his brilliant debut season and will become Palace’s most high profile signing till date.

By shipping out so many players, Arsenal not only have reduced the wage bill considerably, but are also looking to free up some cash for Wenger to make one last ditch-attempt for the want-away Liverpool striker Luis Suarez.

The Gunners have had two bids rejected for the unsettled Uruguayan, as the Reds feel the offer is way short of their valuation to even enter a negotiation. Arsenal are reportedly unwilling to match the £50 million plus valuation of Luis Suarez, but Liverpool remain adamant that a fee closer to £60 million, and nothing less will force them to cash in on their prized asset this summer.