Chelsea travel to Goodison Park on Saturday with a 100% record in tact from their opening two games.

Everton are still looking for their first win of the season after letting slip of leads late in their opening two games, drawing each 2-2.

José Mourinho’s side looked impressive in dispatching Burnley 3-1 to start their season before taking more than an hour to open the score in a 2-0 win at home to Leicester City last weekend. Two newly-promoted sides, compared to this weekend’s opposition who finished fifth in the Premier League last season.

Diego Costa picked up a minor injury in training earlier this week and it has yet to be confirmed whether he will play this game or not. The £32 million summer signing from Atlético Madrid had scored in each of his first two games as a Blue.

Thibaut Courtois heads into this game having gone 166 minutes without conceding a goal since Scott Arfield’s early strike at Burnley. Chelsea have scored five goals since then.

Meanwhile Everton have conceded four goals in their opening two games and conceded at least twice in three of their last four home games dating back to the end of last season. The Toffees did win this fixture 1-0 last season.

Diego Costa could be out with a hamstring injury. André Schürrle is also a doubt. Otherwise José Mourinho has the rest of his squad to choose from.

Romelu Lukaku limped off with a foot injury last weekend but manager Roberto Martínez is hopeful the club’s record signing will be fit in time to face his former club.

Steven Pienaar picked up an injury early last week and is ruled out for this weekend’s match. Bryan Oviedo, Ross Barkley and Arouna Koné have all been long-term injuries.

Christian Atsu is ineligible to face his former club. 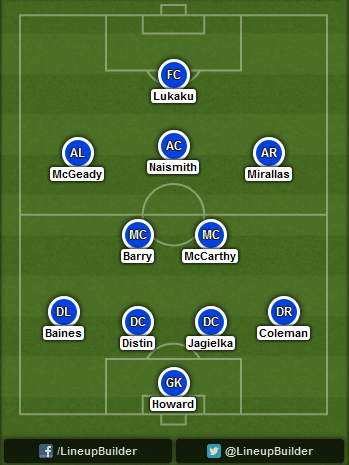 Provided Romelu Lukaku is fit we don’t see any reason why Roberto Martínez won’t go with the same side that drew at home to Arsenal last weekend. Steven Naismith scored the only goal in this fixture last season. 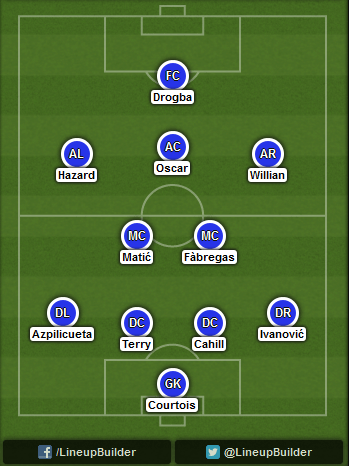 It looks as though José Mourinho will have to make a couple of changes going forward. Willian was their right winger last season so it shouldn’t be a problem for the Brazilian to replace André Schürrle. Didier Drogba has scored a fair few Premier League goals in his time and is capable of leading the line. How many minutes he can play at a high level remains to be tested.

Eden Hazard vs Séamus Coleman
Chelsea’s left forward has continued his fine form from last season by creating several chances in Chelsea’s opening two matches and scoring a goal himself. Everton’s right-back played well against him in this fixture last season but Hazard offers a new threat to the opposition this season by drifting inside as he did often against both Burnley and Leicester City.

Cesc Fàbregas vs Gareth Barry
What an addition Cesc Fàbregas looks like being to this Chelsea team. At least after two games. The former Arsenal captain has already set up three of Chelsea’s opening five goals. He had two efforts on goal in their last game too – the first when he got himself into a good position to score but Kasper Schmeichel wasn’t fooled by the close-range lob attempt. Gareth Barry had a very good game against Arsenal and will need to be at his best again to have a chance of keeping Cesc Fàbregas quiet.

Branislav Ivanović + Willian vs Leighton Baines
Chelsea’s right-back really put pressure on Leicester City last weekend when he attacked in the second helf. Branislav Ivanović even set up the opener for Diego Costa. Everton’s usual left midfielder Steven Pienaar is injured so left-back Leighton Baines will have support from a new player this weekend. Add Willian as threat down the right and Chelsea have something brewing

Prediction: Everton 0-1 Chelsea
Chelsea have made an impressive start to the season, Everton have conceded four goals in their opening two games. Diego Costa’s absence would certainly be a huge blow for the visiting team but we believe they have enough attacking talent to knick three points out of this one.