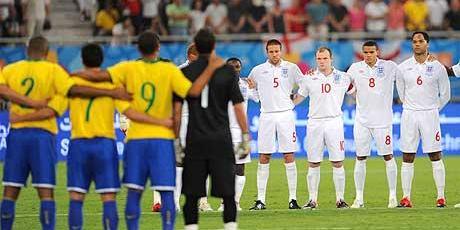 England take on Brazil in a friendly next week at Wembley which should show us how far away Roy Hodgson’s men are from one of the best teams in the world.

England are unlikely to field a full strength team for the friendly match as numerous players are bound to withdraw from the squad with injuries which appear at the last minute. This will give Roy Hodgson a chance to see how some of the England fringe players perform ahead of an important round of World Cup qualifying games this autumn.

Brazil won’t hesitate to field some of their best young players which will give us a chance to see how England copes defensively against a talented side, which likes to build pressure on the opposition.

A positive result for England, similar to their 1-0 friendly win over Spain, could have a positive effect on the side ahead of the remaining games in the World Cup 2014 qualification campaign.

England are well placed in Group H as things stand, two points behind surprise leaders Montenegro who are yet to lose a match. The Three Lions can be confident in their stats as so far they have only conceded two goals in four matches while scoring 12.

England have six qualifying matches remaining and the friendly against Brazil is the next chance for Roy Hodgson to try out certain players or a certain system against one of the best teams in the world.

The positive result will mean confidence for England and momentum heading into their next friendly against the Republic of Ireland before the next round of qualifiers in the autumn.

Ultimately, the result against Brazil is not going to have any real bearing on England’s World Cup qualification process, it will just simply highlight their current progress. They should qualify for Brazil 2014 comfortably and it will take some bad performances and a catastrophic run of results for them not to at least finish second in Group H.