England is a nation united, a land awash with colour and excitement. The Crosses of St George hang proudly in shops, homes and offices and the Three Lions shirt is the must have summer fashion accessory. Holidays to sunnier climes are deemed unnecessary while football fans and those unusual folk not usually bothered about the beautiful game lye back and dream of glory. Even the notorious English weather is playing ball, warming balmy evenings of barbecues, beers and blind confidence in the national team.

Oh what could have been…

Euro 2008 kicks off on Saturday and England is struggling to come to terms with the unthinkable — a major international tournament without our participation. The aforementioned sights will be absent across English towns and cities this summer, as cheers are replaced with a resigned national sigh. Patriotic newspaper front pages will be swapped with features on the credit crunch, while the masses switch their attention to the latest mind-numbing reality TV offerings. 14 years on from England’s failure to qualify for the USA World Cup, the void felt across this green and pleasant land is just about to take hold. And yes, the weather is rubbish too.

Despite rising ticket prices, over-saturated TV exposure and the predictability over which club is likely to be Premier League champions season-on-season, England’s passion for its national game cannot be understated. Over 70,000 supporters turned out for a meaningless Wembley friendly with the USA last week, while 40,000 will travel to Switzerland and Austria this month, even though their national side isn’t taking part. If there was a World Cup or European Championships for fans, surely England would come out on top time after time. 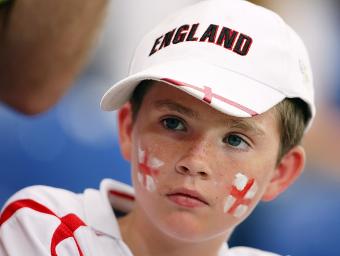 The post-mortem following England’s defeat to Croatia, which ultimately cost us qualification, continues to run and run. Have we squandered a golden generation? Are the number of foreign players in the Premiership hampering national team selection? Is enough being done at grass routes level to ensure a supply of enough quality English players? Was the qualification campaign a failure of poor management or poor player attitude? Are England actually any good…. The questions are endless, the answers not nearly so plentiful.

It’s a gross contradiction that in the same season there was an all-Premiership Champions League Final, England won’t be competing in the European Championships. Premiership football has become the be-all and end-all in this country. Ask any fan whether they would rather England lift the World Cup or their club side win the title and it’s fair to guess nine of ten would go for the latter. Some English football fans have even given up their support of the national team, viewing it an unnecessary past time. Others even question the importance of having a successful England team.

Premier League managers have become increasingly militant about their players joining up with the England squad. With the money and pressure that goes hand-in-hand with Premiership management, bosses can ill afford to see their stars injured on international duty. It’s as if the phrase ‘club v country row’ was coined on these fair shores, with bitter tugs-of-war involving employer and national side the common place. The England national team has become the mother of poor relations its on-going feuds with the all-conquering Premiership clubs.

It’s hardly surprising the England national team faces such difficulties, when you look at the organisation behind it. It has taken eleven years for Football Association to give the go-ahead to a National Football Centre in Burton – a project described by the FA’s development director Sir Trevor Brooking as being ‘as important as the appointment of the national coach’. Under-21 manager Stuart Pearce has expressed disbelieve that the centre, similar to France’s Clairefontaine, hasn’t already been built while ex-Arsenal striker Alan Smith describes its construction as being a ‘no brainer’.

In the time it has taken the FA and British Government to deliberate over the positives and negatives of a facility in Burton, France has won a World Cup, European Championship and two Confederations Cups. Despite spending £798m on the construction of Wembley, the FA could never find the £50m needed for the National Football Centre, which would ensure players of all ages the very best training facilities… until now. If it took the failure to qualify for a major tournament to see the scheme finally approved, some may see England’s omission for Euro 2008 as a triumph for the future prosperity of the national game.

The dithering over Burton exposed the bureaucracy and of lack of foresight so painfully missing at the top of English football. There have been major schisms between the FA, Premier League and British Government which has, by the FA’s own admission, hampered the progress of the national team. It is too simplistic to argue that organisational issues caused England’s failure to qualify for Euro 2008. With the players available for selection for the national team, there shouldn’t have been any reason for the Three Lions not to make it to a major tournament, even if there was chaos in the background. But the clear message is that leadership, direction and cohesion are desperately needed if England is to be a world football force.

The cost of England’s Euro 2008 qualification catastrophe extends far beyond the football pitch. Lack of involvement in the European Championships is to cost the British economy an estimated half a billion pounds. Pubs, restaurants, sports shops and TV stockists are gearing up for disappointing summer takings while broadcaster ITV is counting the cost of a £12m loss in advertising sales. The FA meanwhile has missed out on an estimated £24m merchandising, price money and TV revenue windfall. All this is the midst of a national credit crunch and with Wembley still to be paid for.

The ultimate price of qualification failure is still to be paid. That begins on Saturday as England starts their summer in the football wilderness while the rest of Europe strut their stuff. Most England fans have resorted to finding tedious links to other Euro 2008 nations, such is their desperation to feel part of the tournament. ‘Adopt a nation’ articles are commonplace in the UK’s tabloid newspapers if you’re still in any doubt who to support.

Love or loathe England, spare a thought for us as we dream of what might have been this summer. You never know, we might be cheering on your nation as you do.