The news that Steve McClaren lost his job has filtered through the media this morning, following last night’s abject 3-2 defeat to Croatia at Wembley. It was a defeat that summed up all of the elements of his reign, as a shell-shocked England found themselves 2-0 down within 14 minutes in the crucial Euro 2008 qualifier. Despite restoring parity with 2 of their own in the second-half, the hosts were simply out-classed on the night by their experienced opponents before Mladen Petric determined England’s fate with a deciding goal in the game’s latter stages. 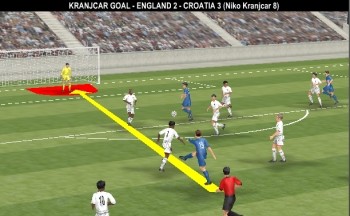 It was a poor pitch at Wembley, believed to be the result of an NFL match being played there 3 weeks ago, while the rain was teeming down. England went close with a header early on, before Portsmouth’s Niko Kranjcar obviously decided there was some truth in the old adage that the keeper should be tested in such conditions. Scott Carson had been called up for Paul Robinson, but the poisoned chalice that is England’s goalkeeping position remained just that, as he allowed Kranjcar’s 30-yard effort to easily squirm past him and up into the top corner of the net. It was a goal that stunned those in attendance and those in white shirts, who could find no immediate response. 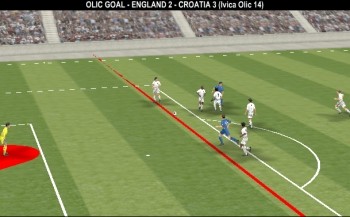 Indeed, the visitors extended their lead just 6 minutes later. Eduardo da Silva surged forward with the ball, before exposing England’s defensive frailties and nerves as 4 defenders surrounded the Arsenal man like moths to the flame. Da Silva played a composed through-ball for Ivica Olic to bolt onto. Correctly, no offside flag came and Carson, whose confidence was already shattered from the opener, was hopelessly exposed and could do nothing as Olic took the ball around him and placed it into the empty net.

In truth, everybody expected the Croats to offer something on the night – their manager, Slaven Bilic, had warned they were approaching the match for the win, as had many of his players – but soon after they were knocking the ball around at will, as Peter Crouch toiled away in his solitary role up. Alan Hansen had predicted a comfortable victory for England prior to kick-off, but then again Manchester United never won anything with kids. Suddenly the nightmares of Graham Taylor’s tenure in charge, with the subsequent failure to qualify for the World Cup in 1994, were flooding back.

Croatia threatened a third soon on 25 minutes, as Kranjcar ghosted in behind the usually impeccable Micah Richards at the far post, but he could only head wide. England could not find any penetrative threat to trouble Croatia, and before long John Motson was begging the Andorrans for a miracle in their fixture against Russia. England got the favour they needed on Saturday, now it was up to them and they were wasting another chance in abundance.

McClaren, who engineered some memorable comebacks in his time at Middlesbrough against Steaua Bucharest and FC Basel, introduced an unfit David Beckham for Shaun Wright-Phillips, who had been one of England’s better players, while Jermain Defoe came on to give Crouch some support in attack. 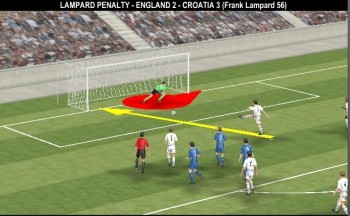 The roof was raised at the famous stadium as the English players emerged for the second-half with some renewed optimism and they upped the pace. McClaren, meanwhile, stood impassively under his umbrella: he would need more than that to stave off the pouring media scorn if there was no comeback this time, and so it has proved.

It didn’t look like improving, when the static defence was again picked off by a through-ball and da Silva latched onto it. Fortunately, a combination of Sol Campbell’s recovery skills and Carson’s outstretched leg diverted the ball wide for a corner.

In fairness, while the loyalty to Beckham seemed outrageous given his recent injury problems and lack of matches stateside, the substitutions had an effect. On 54 minutes, Defoe was tugged slightly by Simunic in the box, and the Swedish linesman had seen enough to warrant a penalty. It was soft, but if the defender had kept his hands to himself, the ball would most likely have been collected by Stipe Pelikosa regardless. 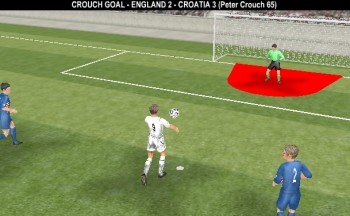 Up stepped Frank Lampard to despatch the penalty into the corner and, suddenly, Wembley sparked into life. Yet even with the deficit reduced, it was the visitors who could have added a couple more; on 58 minutes Wayne Bridge deflected the ball with his weaker foot from 20-yards over a stranded Carson and onto the cross-bar, while before the leveller came, Bridge again got lucky as he dithered on the ball and was robbed by Olic, who could only tamely shoot at the keeper. England still hadn’t really carved out a clear chance in a long time.

Beckham then received the ball out wide, and played a sizzling ball with the outside of his boot into the box. It found Peter Crouch, who chested the ball down superbly before firing a volley into the corner for 2-2. The relief around the stadium and the nation was apparent. 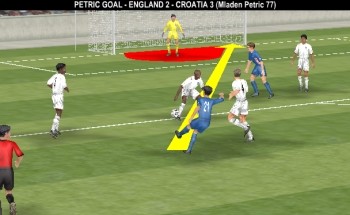 However, there had been too many danger signs to suggest that the danger was over from a three lions’ perspective. Mladen Petric replaced Eduardo da Silva, and within 10 minutes of coming on, he used the acres of space allotted to him by the defence to fire a 20-yard shot across Carson and into the corner of the net for 3-2. On a night like this, there was still room for optimism, even at this stage, but in truth the experienced Croats carried a far bigger threat throughout. Olic did brilliantly to flick the ball into the box from the by-line, but the defence managed to put it out for a corner with Carson stranded.

Darren Bent replaced Joe Cole, who never really got the better of Vedran Corluka all night, as the McClaren threw his last roll of the dice. Substitute number 3 nearly paid off, as Bent hooked a shot towards goal from just inside the box. It was purely opportunist, but unfortunately for the Spurs man, it sailed just over.

Time ticked away, and what had seemed impossible before the match was now startlingly real. Injury-time was played out frantically by the England men and in composed fashion by the visitors.

The final whistle brought the curtain down on the 19-month McClaren era, there could be no other choice for the FA after such a diabolical qualifying campaign. A cacophony of boos showed him the way to go, and he didn’t hang around to shake the hand of Bilic, who masterminded a superb performance. The tactics employed by both coaches reflected their contrasting approaches; McClaren relied on a 4-5-1 to get the point required while Bilic had come purely to win, and sadly, it was the English approach found wanting.