Manchester United could suffer another transfer blow in the summer. It is always going to be hard for the Red Devils to attract big name players without Champions League and that seems to be the likely case with Edinson Cavani as well. 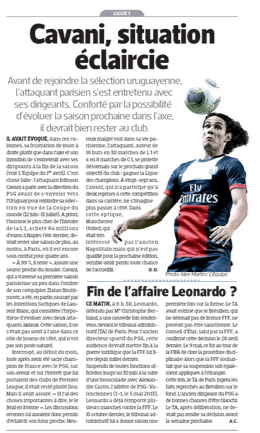 Cavani has been a long term target of Manchester United, with The Guardian even reporting, he is one of the top priorities for new United manager Louis van Gaal.

Reports in France, speculated that Cavani could be on his way out of PSG this summer. The Uruguayan has been forced to play out of his position, as a result of which he is seeking a move elsewhere where he will get the chance to operate as a number nine.

French media even speculated that a swap deal involving Chelsea’s Eden Hazard could be on the cards as well.

However, L’Equipe today reports that Cavani has talked with PSG officials before joining the Uruguayan national team for the World Cup and he’s 99% sure to stay at the club. He wants to help PSG win the Champions League, a competition he only took part twice in his career, one of the reasons why he’s not so keen on joining United.