For a man who admitted to diving in a live interview before recanting his mistake on air, Didier Drogba is not exactly the most intelligent of footballers. You may find this petty, but (lack of) intelligence has a lot to do with what Drogba is doing at Chelsea (engineering his exit from the ‘broken’ club in the most brash and inappropriate way possible).

Like all things Drogba, his interview (which is due to come out today and was appropriately leaked to generate buzz (and more sales)) reeks of emotion and ambition, both themes underlined by an overpowering desire to succeed. It is this drive that has taken Drogba from being a nothing striker, almost looked over, to one of the most feared strikers in Europe (when he’s fit).

So Drogba wants to leave Chelsea, and he wants the grandeur of Barcelona, the pomp of Real Madrid, the nouveau-riche of Inter (most like his current home, Chelsea?) and the elitism of Milan, who have been after him before. Drogba leaving Chelsea would make the Premier League a poorer place in terms of talent (just as Mourinho leaving Chelsea made the PL poorer), but other than Chelsea fans you’d be hard pressed to find someone who wouldn’t celebrate him leaving England the way non-Arsenal fans celebrated Henry leaving Arsenal.

My bet’s on Milan – Drogba will fit well in their system, they’ve been after him before and they’re a striker short, as things are. Inter could swap strikers with Chelsea (Adriano to Stamford Bridge), so could Barcelona (Ronaldinho or Eto’o?), and Real Madrid are the poisonous attraction that no player with grandoise ambitions can reject.

However this plays out, Chelsea are in a pickle. Talk of Drogba’s contract will do them no good – forcing a player to stay is stupid on a club’s part, especially when they stand to earn a pretty sum (and perhaps even recoup their investment) on Drogba.

So what do you guys think? Which of the four clubs (AC Milan, Inter Milan, Real Madrid and Barcelona) will Drogba go to? And perhaps more importantly…

Who’s leaving next though? Ballack, Sheva, Lampard, SWP, Joe Cole? Speculate away, ladies and gents, while you enjoy one of the most poignant images of Drogba’s career at Chelsea: 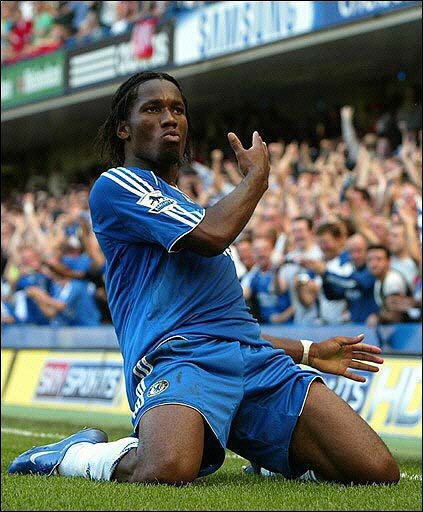