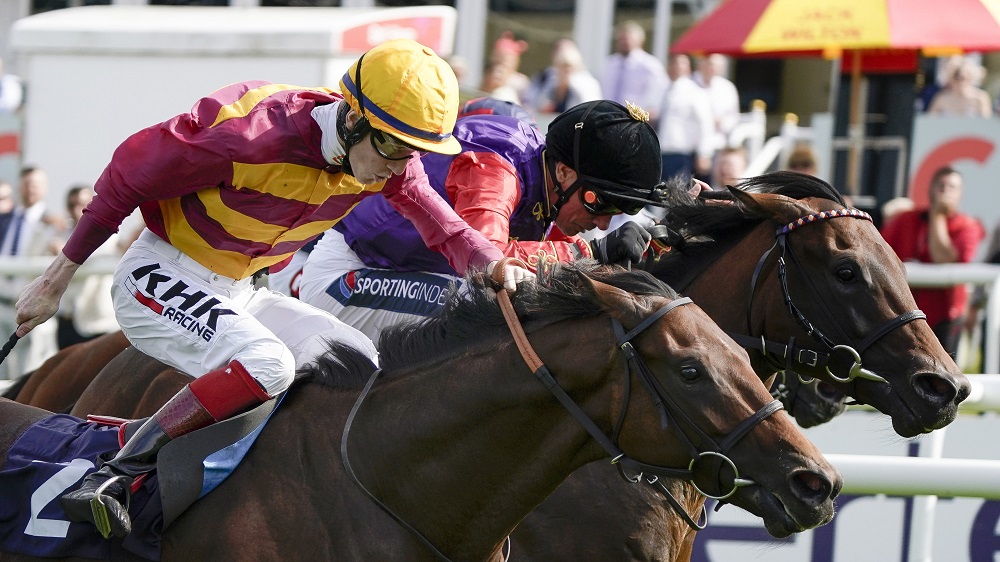 The 7f Group 1 Dewhurst Stakes is the highlight of Newmarket’s Future Champions Festival. This leading juvenile contest invariably determines the champion two-year-old. Ahead of the 2021 renewal on Saturday, 9 October (2:55), let’s take a look at the eight runners.

Favourites have a fantastic record in the Dewhurst Stakes with six of the last nine obliging. This race comes at the end of an established pattern of Group races for juveniles. Four of the last six winners ran in the Vincent O’Brien National Stakes on Irish Champions Weekend at the Curragh. Three of those won that race in the Emerald Isle, proving themselves at Group 1 level en route to this.

Why Native Trail is favourite in the Dewhurst Stakes betting

Godolphin and their retained trainer Charlie Appleby took this two years ago with Pinatubo. In Native Trail, the same connections have an equally exciting prospect and clear Classic contender for next year on juvenile form to date. Unbeaten in three starts, this Oasis Dream colt beat subsequent Acomb Stakes and Royal Lodge scorer Royal Patronage by four lengths on his debut at Sandown.

Appleby had no hesitation pitching Native Trail in at Group 2 level for the Superlative Stakes at the July Festival here off the back of that taking bow. He prevailed by a short-head from next time out Listed winner Masekela. A tilt at Irish Champions Weekend was the next obvious target and Native Trail obliged there for the hat-trick.

He demolished the best juveniles in the Emerald Isle. Native Trail ran out an impressive 3 1/2 lengths winner over Point Lonsdale. The runner-up came into the race on a massive upward curve and unbeaten in four starts progressing through the grades. There was a further half-length back to Group 1 Phoenix Stakes hero Ebro River in third.

That form sets a clear and obvious standard. Native Trail is trained locally to the course, has beaten the right horses en route and simply has no holes in his profile. It is very difficult to make a case against him landing the four-timer. Native Trail is the 8/11 favourite with Betfred for the Dewhurst Stakes with very good reason.

Bet on Native Trail with Betfred

Roger Varian saddled Belardo to glory in this race back in 2014. Bayside Boy won the Champagne Stakes at Doncaster in likeable fashion last time out, so looks the obvious one to chase Native Trail home. After scoring on debut at Newbury, this son of New Bay went down fighting by a head to the aforementioned Masakela in the Listed 7f Denford Stakes at the same venue.

Bayside Boy then took his form to a new level on Town Moor. The Queen’s juvenile colt, Reach For The Moon, came into the Champagne with a great reputation after landing the Group 3 Solario Stakes at Sandown in style. Bayside Boy hit the front with half-a-furlong left and ran on for a head success.

Further improvement is obviously necessary if he wants to bridge a 10lb official ratings gap with Native Trail. Bayside Boy is 5/1 with Parimatch, but clear second best on all known form. Native Trail will have to run below par if there’s to be an upset here. Bayside Boy appeals for the forecast spot.

Back Bayside Boy with Parimatch

Aidan O’Brien has five Dewhurst Stakes winners in the last eight years. That means anything sent over from Ballydoyle to Newmarket is worth a second look. He relies solely on Glounthaune in this renewal to give a record-equalling eighth success in the race. A colt by Kodiac, he just has one career outing under his belt after scoring in a Curragh maiden back in April.

Glounthaune has had three times longer off the track than any other Dewhurst Stakes runners this year. That is a concern, but he beat a very useful horse in Castle Star back in the spring. The runner-up has since landed Listed and Group 3 contests in Ireland, ran fourth in the Phoenix Stakes and second in the Middle Park at this venue.

That race is the other top juvenile Group 1 run in the UK at the end of the season. Glounthaune is open to any amount of further progress, but the fact remains this is a massive step up in grade after 175 days on the sidelines. It would be a feat of trainer, but O’Brien is the master. Glouthaune is 12/1 with Boylesports for the Dewhurst and could be each way value if not needing the run.

The other Irish raider, Straight Answer, is about half that price after being supplemented by Juddmonte and trainer Ger Lyons. Unbeaten in two starts, this Kodiac colt won a Curragh maiden and then bolted up in the Blenheim Stakes at Fairyhouse last month. That is only a Listed contest, however, and this is a big jump to Group 1 level. Connections have confidence in Straight Answer, though, and that’s why he is 11/2 with 888Sport for his hat-trick.

Back Straight Answer with 888Sport

Only two of the remaining half of the field have a rating within a stone of Native Trail. It is very hard to fancy any of the other four on all known form. Go Bears Go beat the aforementioned Castle Star in the Group 2 Railway Stakes at the Curragh earlier in the season, but saw that form reversed in the Middle Park last time out. He is 33/1 with Boylesports to cause an upset for trainer David Loughnane.

Dubwai Legend didn’t build on a very taking debut at Doncaster when a fading third in the Acomb Stakes last time out. Hugo Palmer has since given his charge a 52-day break to freshen up. The Dewhurst Stakes demands plenty more from Dubawi Legend, who only has a rating of 97, so that explains odds of 20/1 with Parimatch here.

Connections of Coventry Stakes scorer Berkshire Shadow are right to try 7f again after his second in the Vintage Stakes to Angel Bleu at Glorious Goodwood. The winner has since relished a testing surface over in France and took the Group 1 Prix Jean-Luc Lagardere on last Sunday’s Arc card. There is a disappointing run in the Gimcrack Stakes at York for punters to overlooked with Berkshire Shadow, but he might outright odds of 25/1 with Betfred in this.

Dhabab has been a beaten favourite three times since winning his debut at Leicester. He faded on the July course here in the Superlative Stakes and finished third. Native Trail has clearly progressed since then, so there is no reason why that form shouldn’t be upheld here. Dhabab, trained by John and Thady Gosden, was only fourth in the Group 2 Mill Reef at Newbury but may appreciate going back up in trip. He is 33/1 with Bet365 for this.