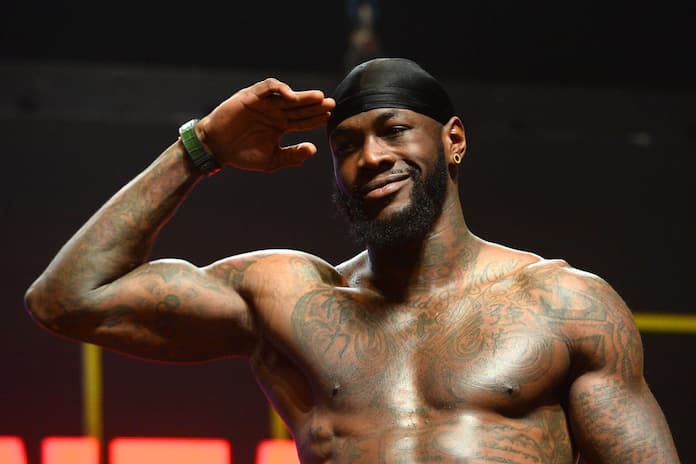 DEONTAY WILDER returns to the ring as he faces tough test in heavyweight dangerman, Robert Helenius. This is the first time Wilder will have fought since his trilogy bout with Tyson Fury 12 months ago, so it’s safe to say boxing fans are excited to see the ‘Bronze Bomber’ back in action this coming weekend.

On paper, this looks relatively on sided, but is still a decent test for Wilder on his return to action. Wilder has won all but one of his fights via knockout, so will he be able to bounce back from back-to-back defeats to Fury and get back on the KO train? We’ll find out on Saturday…

If you fancy a bet on this fight in the heavyweight division, read on and check out our betting picks and predictions, as well as making use of the various free bets and betting offers on this page.

The return of the ‘Bronze Bomber’ this weekend has got boxing fans talking again. The former WBC World Heavyweight Champion returns after a year out of the ring, and faces heavyweight gatekeeper, Robert Helenius.

The American heavyweight kingpin will be looking to get back to winning ways and throw his hat back into the mix of the best heavyweights in the world.

Wilder comes to the Barclays Center this weekend off the back on two knockout defeats at the hands of Tyson Fury. The 36-year-old will be hopeful of righting those wrongs and securing yet another knockout come Saturday night, to begin his quest back to the heavyweight summit.

Helenius in his own right comes here fresh off the back of some of his best professional boxing victories. ‘The Nordic Nightmare’ emphatically stopped Adam Kownacki twice in his last two outings, and comes here in the form of his career looking for an absolutely enormous scalp.

Wilder will be hopeful of making light work of Helenius, potentially setting up another run at the world heavyweight titles in 2023. A fight with Andy Ruiz Jr looks like it could be on the cards for the beginning of next year, so a statement victory on Saturday night could be the key that opens the door to a fruitful next 12 months of the American heavyweight star.

Wilder is the overriding favorite, but write Helenius off at your peril. This is a good match-up for Wilder in a fight he should win, but that he will still have to answer a lot of questions in.

This card overall is a stellar one, with some huge names such as Caleb Plant, Gary Antonio Russell and Anthony Dirrell on the bill. Without further ado, here are our Deontay Wilder vs Robert Helenius betting picks and best bets.

Our first betting pick is that Deontay Wilder will get back to winning ways in emphatic fashion on Saturday night at the Barclays Center.

Apart from that, every single one of Wilder’s wins has come inside the distance. On Saturday night, we think that could very well be the case again. Although Helenius is a tough man and a decent heavyweight, the ‘Bronze Bomber’ has the power to knock out any man in the division, maybe bar Tyson Fury.

The sheer speed, timing and ferociousness of Wilder’s right hand is frightening. When he detonates it on the chin of his opponent, 99% of the time they go to sleep. Although Helenius is tough, he has been stopped twice by far less heavy handed heavyweights than Wilder.

Both Gerald Washington and Johann Duhaupas have bother stopped ‘The Nordic Nightmare’. If they can do it, then Wilder most definitely can. We think the stoppage will come in the first third of the fight for Deontay Wilder.

Deontay Wilder vs Robert Helenius Betting Tip: Wilder to win by KO/TKO in Rounds 1-4 @ +140 with Bovada

Our Best Bet for this heavyweight showdown from Brooklyn, New York this weekend is that Deontay Wilder will knock Robert Helenius out in either the second or third round. This is priced sensationally with Bovada, who are offering a mouth-watering +350 for this outcome.

Wilder is the biggest puncher in the heavyweight division. Period. When he lands his big shots, his opponents wilt to the canvas instantly. He has tonnes of highlight reel knockouts on his resumé, and we think he may secure another one on Saturday night.

Wilder will be looking to make a statement on his return to the ring. Everyone will be in attendance hoping for a big Wilder KO, and here at SportsLens we think that could well be the case.

The reason we have gone for Rounds 2-3 is that we could see Wilder downloading the data on Helenius in round one, before letting loose with his clubbing shots from Round 2 onwards.

Once Wilder’s big right hand lands on the chin of Helenius, the fight will be over. Avoiding one of Wilder’s right hands is almost impossible, especially with the spite and speed he throws them with.

Once Wilder does land that big right hand on Helenius’ chin, the fight will more than likely be over. We could see the end coming in the second or third round, with the 6″7 heavyweight powerhouse making a statement to the rest of the heavyweight division.

Deontay Wilder vs Robert Helenius Best Bet: Wilder to win by KO/TKO in Rounds 2-3 @ +350 with Bovada

Haven’t claimed the Wilder vs Helenius betting offer yet? Don’t worry, take a look at the best betting sites and claim the best bookmaker free bets. Be sure to also check out the best offshore betting sites.

When Is Deontay Wilder vs Robert Helenius?

TV channel: If you have Fox Sports on your TV, you will be able to watch this compelling heavyweight clash live from the Barclays Center on Fox Sports PPV, provided you are a subscriber to the channel and have paid the $74.99 pay-per-view price.

Live stream: Fox Sports subscribers can also catch the action online and via the Fox Sports app for free, provided you have the app downloaded on your device, are a subscriber to the channel ad have paid for the PPV on your account.