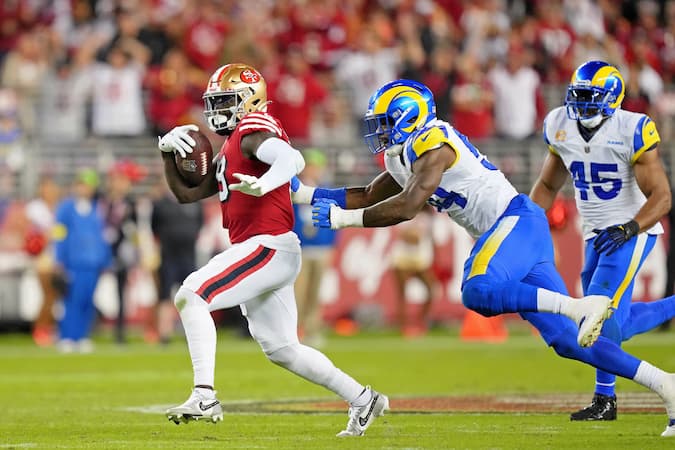 Deebo Samuel showed why he earned a new contract this offseason with another monster performance after the 49ers picked off the defending Super Bowl Champions.

The wide receiver caught six passes for 115 yards, including a 57-yard score, and Talanoa Hufanga returned an interception 52 yards for a touchdown to see the San Fransisco 49ers to a huge 24-9 victory over the defending-champion Los Angeles Rams on Monday Night Football.

According to NFL Next Gen Stats, Samuel’s 57-yard touchdown catch in the second quarter included 51 yards after catch over expectation. That’s the second most on any pass play for the Niners since 201, behind only the 83-yard catch he had to set up a score in a Week 8 win against the Chicago Bears last year. Samuel ran a grand total of 79.7 yards on the touchdown.

Deebo Samuel makes one of the better catch-and-runs you'll see for an amazing 57-yard TD https://t.co/Goquar11vx

Samuel had his say on the performance post-match.

“Every time I get the chance to get the ball in my hands, it’s just my mentality of trying to make it a big play, but it’s second nature to me right now…When I go out there it’s just me and the ball. Breaking the tackles is something I do all the time.”