After losing to Chivas de Guadalajara in the semi final of the CONCACAF Champions’ Cup, DC United went on to win the MLS Supporters Shield with sixteen wins, seven draws, and seven losses in the league. Even if Chivas USA had won their last match, DC would have still won the Shield on goal difference, thanks to a twenty-goal season from newcomer and league Most Valuable Player Luciano Emilio. However, their season ended frustratingly when they lost 3-2 on aggregate to the Chicago Fire in the first round of the MLS Cup playoffs.

Besides the Champions’ Cup, DC were also involved in the SuperLiga, US Open Cup (briefly), and the Copa Sudamericana. They lost 1-0 to Harrisburg City Islanders of USL-2 (American second division) in the Open Cup, but they were anything but disheartened by that. In the SuperLiga they lost to the LA Galaxy in the semi finals. And finally, the Copa Sudamericana ended when DC lost to Chivas de Guadalajara (again) on the away goals rule, after the two-legged tie ended 2-2.

Defender Gonzalo MartÃ­nez (36 caps with Colombia) has joined the squad from Millonarios. He will help plug up a defense that was the only one in the top three to give up thirty goals last season. He will be partnered by Argentine Gonzalo Peralta.

Christian Gomez left and was replaced by Marcelo Gallardo, who is DC’s newest Designated Player signing. 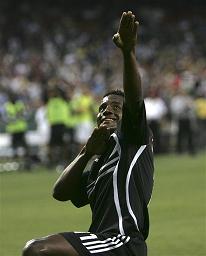 Luciano Emilio will be back. That’s all I need to say about him.

Ben Olsen had one of his most successful seasons last year after switching from central midfield to right wing. He scored seven goals, including a hat trick against New York in a 4-2 victory. If he recovers well from off-season ankle surgery, he will be impressive once again.

Marcelo Gallardo will bring European experience and forty-four Argentina caps to the table for DC. He will be the playmaker, and a big part of any success they may have this season.

Although it’s not a major concern, DC should try to keep the goals conceded to a minimum. Unless Emilio has another stellar season, scoring twenty again, or more, there could be trouble at the back. Looking for a consistent, dependable goalkeeper should not be out of the question.

Other than that, if Olsen and Gallardo can lead effectively from the midfield, and Emilio puts at least a few in the back of the net, they will do alright.