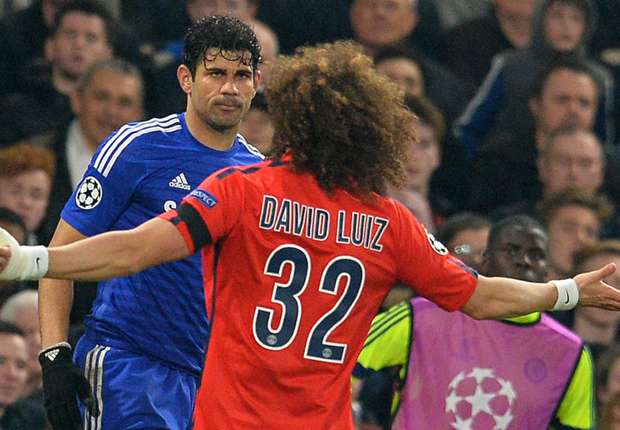 David Luiz says he would welcome Diego Costa to Paris Saint-Germain should the Chelsea striker decide to leave the London club in the future.

The 27-year-old joined Chelsea in 2014 from Atletico Madrid, and scored 20 goals in his first season, leading the Blues to Premier League title last campaign.

This season, however, it has been a different story. He has struggled to replicate last season’s form and has only managed seven goals in 18 league matches so far.

With Mourinho gone, Costa seemed to have found his mojo back under Hiddink, having scored five goals in his last five games for Chelsea.

Luiz, a former Chelsea defender, has told the Mirror that he would happily greet the arrival of one of Europe’s top strikers at PSG.

“Diego is one of the most clinical strikers in Europe, he would be a welcome addition to any team,” Luiz said on Monday.

“I think PSG have made their intent clear over the last three or four seasons, that we only add the best players.

“If Diego decides he has had enough of England and wants a new challenge, of course he would be welcome here.”

Luiz further reveals that they enjoy a good camaraderie off the pitch, adding Costa is “one of the nicest guys you can meet”.

Both the players are expected to square off on the football pitch next month, when PSG and Chelsea face each other in the Champions League Round of 16.